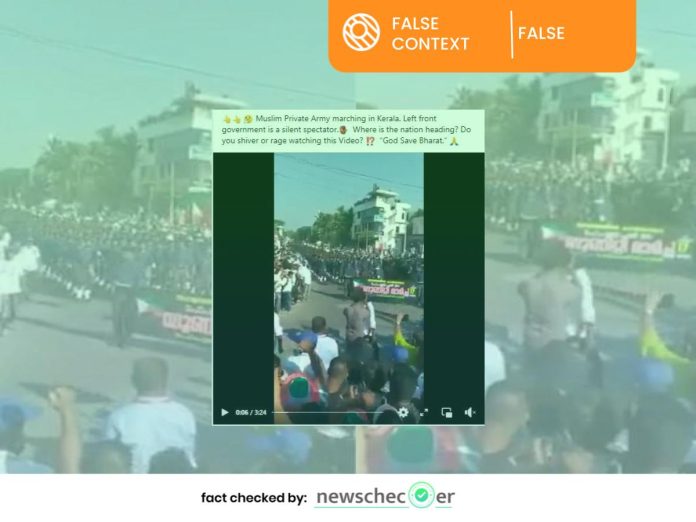 The opposition leaders have often accused the CPI-M government in Kerala and CM Pinarayi Vijayan of “religious appeasement” favouring the minority community at the cost of the Hindus in the state. In this context, a video claiming to show “Muslim Private Army marching in Kerala,” is doing the rounds on social media platforms with the users calling out the “Left front government” a “silent spectator.” Newschecker found the claim to be untrue.

A three-minute and twenty-four-second-long video is being widely shared on Facebook claiming to show the parade by “Muslim Private Army” in Kerala. The caption adds, “Where is the nation heading? Do you shiver or rage watching this Video?”

A shorter version of the video is doing the rounds on Twitter as well with similar captions.

This is not the first time that that videos and images claiming to show “Muslim Army” in Kerala have found their way to the digital platforms. Last year, a set of three images claiming to show “Muslim Army” formed by the PFI to “fight against India”, went viral on social media. Newschecker had found that the images belonged to the Muslim Youth League. You can read our fact check here.

To verify if the video shows Muslim Private Army Marching in Kerala, Newschecker began carefully analysing the video and spotted a banner with text written in Malayalam script. Our Malayalam team confirmed that the text read, “Popular front of India unity march.”

According to the official website of the PFI, “Popular Front Day is celebrated all over India to commemorate its formal launching as a national movement on 17 February 2006. The day witnesses large scale participation of people in the rallies and volunteer marches.”

Taking a clue, we conducted Google reverse image search using the keyframes of the viral video along with the keywords “Popular front of India unity march in Kerala,” and found a video uploaded on the verified  Facebook page of the People Front Of India in 2020 with the caption, “UNITY MARCH 2020 || BE THE SENTINEL OF FREEDOM || FEBRUARY 17 || POPULAR FRONT DAY 2020.”

52 seconds in the video, we were able to spot troops marching in uniform and formation similar to that in the viral video.

We continued our investigation and looked up keywords “Popular front of India unity march 2020 in Kerala “ on YouTube and found a video uploaded by People Front Kerala’s channel on February 24, 2020.

We were able to spot several keyframes of the viral video in the clip of People Front Day Unity March in Kerala’s Ernakulam uploaded on YouTube in 2020.

Newschecker conducted a keyword search for “Popular front of India unity march 2020 in kerala ernakulam” on Google and set the time frame from January 1, 2020 to February 29, 2020 and found that Malayalam news website ‘Madhyamam’ and ‘The Tejas News’ have reported about the PFI’s unity march.

Vasudha Beri
Vasudha noticed the growing problem of mis/disinformation online after studying New Media at ACJ in Chennai and became interested in separating facts from fiction. She is interested in learning how global issues affect individuals on a micro level. Before joining Newschecker’s English team, she was working with Latestly.
Facebook
Twitter
WhatsApp
Linkedin
Previous article
22-Year-Old Killed For Not Speaking Urdu? No, Karnataka Home Minister Makes False Claim, Retracts It Later, Triggers Misinformation Online
Next article
Viral Video Of ‘Hindu New Year Rally Being Stopped By Muslims’ Is An Old Video From Punjab