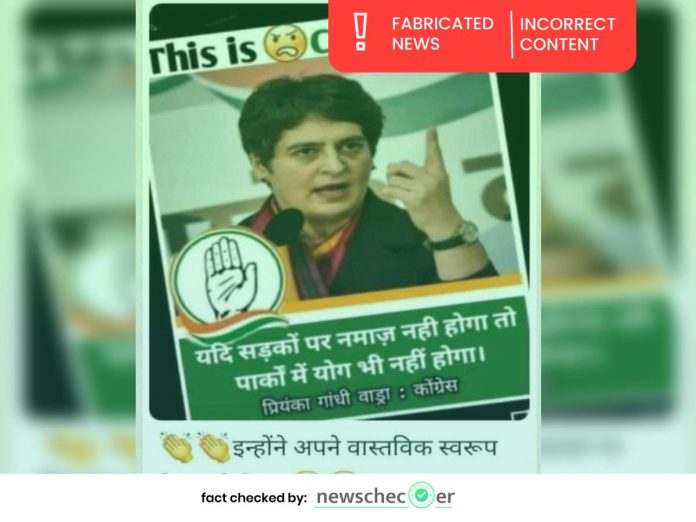 A post carrying the image of Priyanka Gandhi Vadra, and a quotation attributed to her which reads “If Namaz is not allowed in the streets, then Yoga will also be stopped in the parks” is going viral on social media. The image also labels Congress Party as Indian Muslim League in disguise.

Newschecker found that this Facebook post was posted by Adv. Sushil Soni had 1500  shares and around 996 comments.

The claim was also Tweeted by Sanjay Pandey, who is the Leader of Opposition – Municipal corporation Jagdalpur Bastar (C.G.) on 27th November, 2021. The tweet questioned Priyanka Gandhi Vadra’s religion, asking if she was a Hindu or Muslim.

Priyanka Gandhi Vadra is the general secretary of the All India Congress Committee in charge of Uttar Pradesh. With the upcoming UP Elections, the post is gaining increasing traction in both Twitter and Facebook. It is being claimed that Priyanka Gandhi has made this statement in order to pander to the Muslim voters in UP.

Priyanka Gandhi Vadra is the general secretary of the All India Congress Committee in charge of Uttar Pradesh.With the upcoming UP Elections, the post is gaining increasing traction in both Twitter and Facebook. It is being claimed that Priyanka Gandhi has made this statement in order to pander to the Muslim voters in UP.

A  keyword search for the words ‘Priyanka Gandhi yoga’ revealed that the following results:

A keyword search of the quote  on Google News  lead us to an article in Jansatta from 8 May, 2018.

According to an article published in Jansatta on 8 May 2018, CM of Haryana, Manohar Lal Khattar had made a statement saying that Muslims should offer Namaz only in mosques and not in public places. Congress leader Ajay Yadav responded to this statement, according to which he said instead of making such statements, the CM should provide a bigger space for those who offer Namaz. Due to insufficient space, they pray on the road. Ajay Yadav also questioned that if Yoga is done in parks or sometimes there is Jagran on the road, then why are Muslims alone being blamed. Priyanka Gandhi is not mentioned anywhere in the report.

Newschecker also conducted a search on Priyanka Gandhi Vadra’s social media accounts on Twitter and Facebook timeline with the quote “सड़कों पर नमाज नहीं होगा तो पार्कों में योग भी नहीं होगा” and found no results attributing the quote to her. She had not tweeted or made a Facebook post on this topic on her social media. We also went through the Indian National Congress’ Youtube page but could not find any information regarding this quote.

We also contacted the UP Congress spokesperson Ajay Verma to know the truth of the claim that is going viral on social media. During this he told us, “The claim being made on social media is wrong. No such statement has been made by Congress National General Secretary Priyanka Gandhi Vadra.”

According to the investigation done by Newschecker team, that Congress National General Secretary Priyanka Gandhi Vadra has not made any such statement that “If there is no Namaz on the streets, then there will be no Yoga in the parks” to get Muslim votes. The claim shared on social media is false.