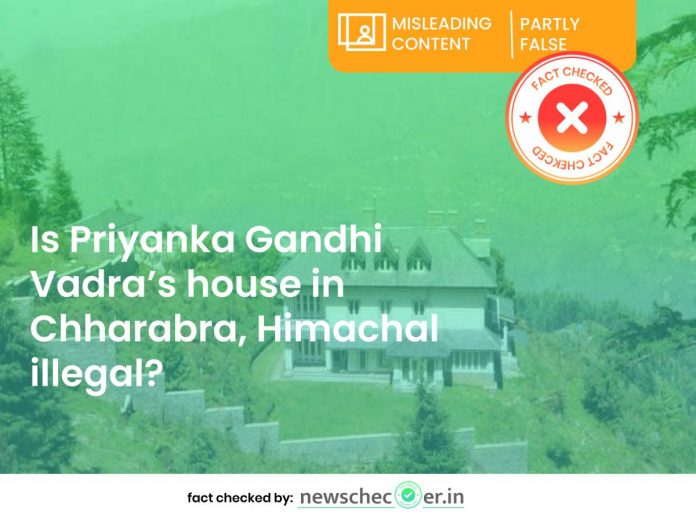 The hashtag #DemolishPriyankaHimachalHome began trending on Twitter last week with many users demanding Gandhi’s Himachal home be demolished. Some of these users include supporters of the Bharatiya Janata Party. A few examples of these claims can be read below.

More such claims can be viewed here.

Note this isn’t the first time Gandhi’s house in Himachal Pradesh has become a topic of dispute. This house has caught the attention of the media and public before as well, and the reason remains that according to the law, no outsider or non-agriculturists can buy land in Himachal Pradesh.

However, a 2007 Tribune India article reads, Priyanka Gandhi “formally became the owner of four bighas and five biswas of land in Charabra on the outskirts of the town after the registry was done in her name on a payment of Rs 46.79 lakh.”

With regard to the validity of the land and house, Section 118 of the H.P. Tenancy & Land Reforms Act, 1972 allows people from outside of Himachal to buy land in the state to build a house. In Gandhi’s case well, the then government sold her the land under this law.

Under the H.P. Tenancy & Land Reforms Act, 1972, there are provisions that must be complied with before the government can sell the land as well as certain exceptions to these provisions. You can read all the details of the Act here.

As reported by The Hindu in 2013, “There were 52 educational societies and three private universities among the 881 entities who were permitted to buy land over the period. Several hydropower companies, corporate house, industrial units and religious bodies were also among those for whom permissions under Section 118 of the HP Land Tenancy and Reforms Act 1972 were allowed,” said the then Revenue Minister Kaul Singh Thakur during a question hour.

A 2013 Indian Express article details how BJP’s Prem Kumar Dhumal led government granted permissions to purchase land in the state between 2010-2012. A majority of whom are outsiders and non-agriculturist Himachalis.

“Priyanka tops the list. She was granted permission in 2011 to purchase 922 sqm of land in addition to the three-and-a-half bigha that she had bought during the 2006-2007 BJP for construction of a cottage in high security zone of Charrabra, close to President’s Summer Retreat,13 km from Shimla. The BJP government allowed her to buy the additional land near the plot she already owned.”

In The Wire article titled, “As Details of Priyanka Gandhi’s Land Deal Surface, RTI Petitioner Alleges Foul Play,” Bhattacharya’s suspected flaws in the land deal are detailed.  The article also includes a response to his RTI by the DG of Shimla.

As per The Wire’s article, Bhattacharya found four major flaws in the land deal:

Newschecker spoke with senior advocate Vishwa Mohan Sharma of Himachal Pradesh High Court in order to understand the law pertaining to the above questions. In response to the first two questions, he said there is no such provision in this law.

However, Sharma explained that there are a few doubtful points with regard to Gandhi’s land purchase in Himachal. One such point is allowing Gandhi, an outsider in Himachal to purchase land within a short time frame. These questions can only be asked from a moral ground as no rules have been violated from a legal standpoint in this purchase, he adds.

Our research makes it clear that land purchased by Priyanka Gandhi Vadra in Himachal is not illegal. Though the way in which certain rules were relaxed including allowing her to purchase in a short time-period can be questioned. Therefore, the claim on Gandhi’s Himachal home being illegal is misleading.

Nikita Vashisth
Facebook
Twitter
WhatsApp
Linkedin
Previous article
Photograph Attributed To Recent Clashes Between India And China In Eastern Ladakh Is Misleading
Next article
ICMR Did Not Release Any Guidelines For Use Of Ivermectin In COVID-19 Treatment, UP Government Did