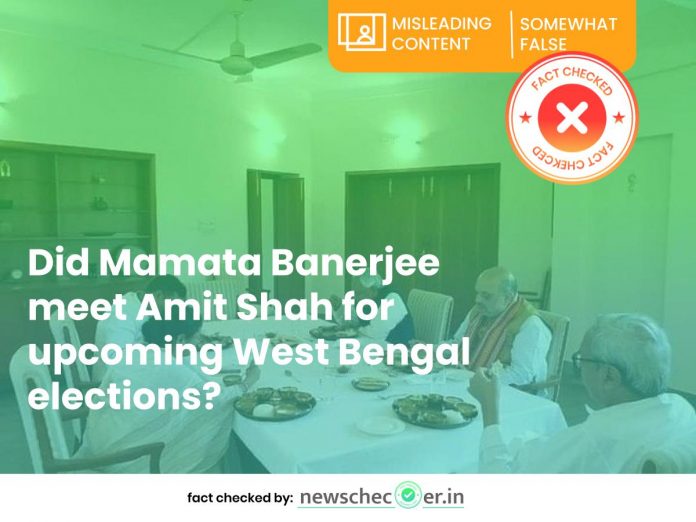 An image of Mamata Banerjee with Amit Shah and other politicians eating together has been circulating on social media platforms. Users claimed that this meeting was

Post the Bharatiya Janata Party led-NDA victory in Bihar related fake news has been on the rise. Some politicians have blamed the Election Commision and rigging of EVMs for their defeat. While the NDA got an absolute majority, the RJD emerged as the single largest party.

In light of the upcoming elections in West Bengal, the viral image of Mamata Banerjee with Amit Shah and other politicians is being circulated with the implication that the meeting was set up between BJP and TMC for the election.

Other users have shared similar claims.

A Google reverse image search led us to multiple news reports which included the image from the claim.

One such news report published in February 2020 by NDTV is titled, “Amit Shah, Mamata Banerjee Face-To-Face At Naveen Patnaik’s Dining Table.” It reads, “The two may rarely have a good word for each other in public but on Friday, Union Home Minister Amit Shah and West Bengal Chief Minister Mamata Banerjee were seen dining together courtesy Odisha Chief Minister Naveen Patnaik.”

Mamata Banerjee and Amit Shah had “travelled to Bhubaneswar to attend a meeting of the Eastern Zonal Council, a forum of eastern states, chaired by the Home Minister. Naveen Patnaik and his Bihar counterpart Nitish Kumar were also present,” as per the article.

On 28 February, Naveen Patnaik tweeted the image with the caption, “Such a pleasure having the company of Union Home Minister @AmitShah ji, my colleague CMs, @MamataOfficial, @NitishKumar ji & Union Minister @dpradhanbjp ji at Naveen Niwas. Had a wonderfully interactive time over some home cooked #Odia delicacies.”

Hindustan Times, Times of India, and Mumbai Mirror have reported about the same with the image included.

This makes it clear that the image in context has nothing to do with the upcoming West Bengal election. There is also no mention of Amit Shah or Mamata Banerjee discussing the election anywhere in the reports.

Our research makes it clear that the image in context has nothing to do with the upcoming West Bengal elections. It was taken at Odisha CM Naveen Patnaik’s residence in February in view of the Eastern Zonal Council meeting.