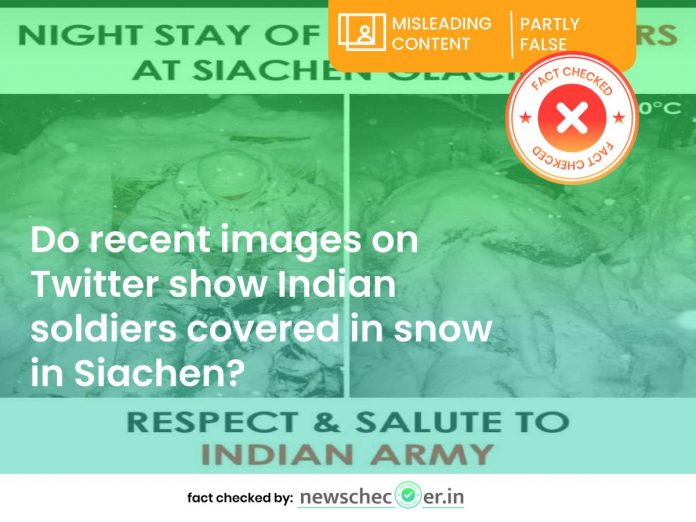 Twitter users shared an image of soldiers covered in snow attributing it to Indian soldiers at the Siachen Glacier with temperature at -50 degrees Celsius.

One such tweet shared on 19 December reads, “One of theost Harshest conditions on this planet, soldiers facing at the highest battlefield Siachin. Other high altitude areas along LC and LAC are no different except the temperature is few celcius higher. Jai Hind Ki Sena”

Amid the ongoing India-China border standoff related misinformation continues to circulate online. Newschecker previously debunked a variety of misleading and false claims related to the ongoing land dispute between the two countries.

In the latest, an image of soldiers covered in snow is being attributed to Indian soldiers at Siachen.

Through a reverse image search on Yandex.com we came across a 2017 blogpost attributing the first image in the claim to Russian soldiers.

Another search result led us to a website called stopfake.org which also attributed the images to Russian soldiers. StopFake is a fact-checking initiative founded in 2014 to refute Russian propaganda and combat fake news.

On the website was a link to a 2013 post on vk.com which shows one of the claim’s images. VK is a Russian online social media and networking service.

We also found that in 2017 SM Hoax Slayer debunked this claim in a response to Kher’s tweet.

Please note that we were unable to trace the original source of the images in the claim.

Contrary to the claim, the images don’t show Indian soldiers covered in snow at the Siachen Glacier. Our research points to these images dating back to 2013 showing Russian soldiers.