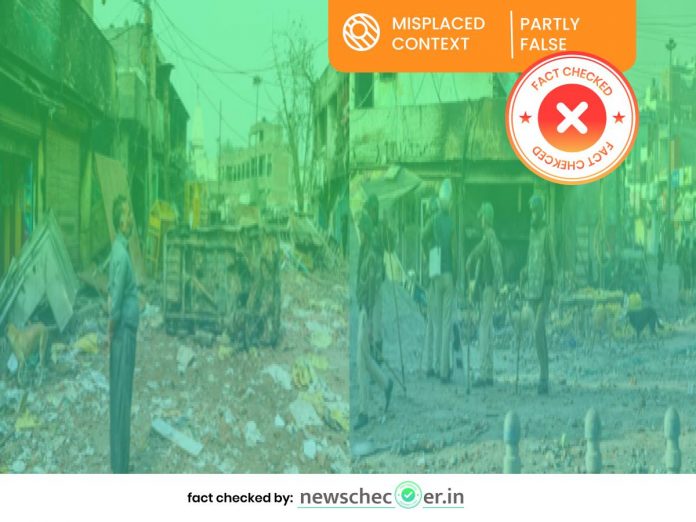 On 7 March, violence broke out in Telengana’s Bhainsa town in which multiple persons including police officers were injured. The town witnessed multiple houses, shops, and vehicles set on fire.

Citing Telangana’s North Zone Inspector General of Police, Y Nagi Reddy, The News Minute reported that the violence was started by members of the Hindu Vahini. As per this report, violence was triggered by a member of Hindu Vahini and his friend picked a fight by hitting a youth from a different community on his head when he was walking on a road in Zulfiqur gali.

“26 cases were registered in connection to the violence and most of the accused were members of the Hindu Vahini,” as per an Indian Express report.

Days after news about the Bhainsa violence broke, social media users shared images of post-violence-destruction-sites attributing it to a mob attack by the Muslim community in Bhainsa.

One such tweet by a user reads, “In a case of deliberate, largscale violence, a Muslim mob attacked members of the Hindu community and looted and burnt their property in Bhainsa town ofTelangana. The Muslim mobs on a rampage also pelted stones at police who rushed to the spot.”

The hashtag #SaveHindusOfBhainsa trended online for a significant amount of time after these claims began circulating.

You can view another example of the claim below.

We did a Google reverse image search of both images in the claim and found that they are from the riots in Northeast Delhi, 2020.

We found that the first image was published by various news organisations last year.

The second image was found on Getty Images titled, “TOPSHOT-INDIA-POLITICS-RIGHTS-UNREST”.

Photographed by Sajjad Hussain/AFP, it’s description reads, “TOPSHOT – A resident look at burnt-out and damaged residential premises and shops following clashes between people supporting and opposing a contentious amendment to India’s citizenship law, in New Delhi on February 26, 2020. – Riot police patrolled the streets of India’s capital on February 26 following battles between Hindus and Muslims that claimed at least 20 lives, with fears of more violent clashes.”

The same was published by The Independent, UK last year in a news report titled, “Delhi riots: Death toll rises to 27 with mosque set on fire in deadliest violence in capital in decades.”

Our research makes it clear that the viral images are from riots in Northeast Delhi last year and have nothing to do with the recent violence in Bhainsa, Telangana.

Facebook
Twitter
WhatsApp
Linkedin
Previous articleMinistry Of Labour And Employment Has Not Made Any Announcement Of Rs. 1.2 Lakh Funds For Working Labourers
Next articleOld Images Of BJP Workers Shared Ahead Of Bengal’s Assembly Election To Mislead Voters