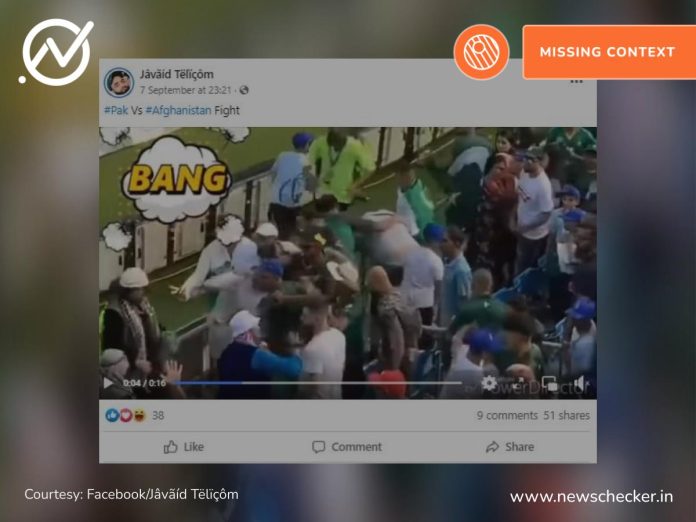 Over the past couple of weeks, social media has been flooded with content relating to the recently concluded 2022 Asia Cup tournament. The Super 4 Afghanistan Vs Pakistan match on September 7 saw the Afghan fans vandalising the Sharjah stadium and hurling chairs at Pakistanis after suffering defeat in a thrilling game. It is in this context, a video showing a clash between two groups in a stadium is being widely shared online. Newschecker found the video to be old and unrelated to the recent tournament.

On comparing the viral clip with the YouTube video, we noticed certain similarities in their keyframes. The same can be seen below.

Following this, we conducted a keyword search for “Pakistan,” “Afghanistan”, “fans”,”fight” “Cricket,” and “World Cup” on Google, set the time frame for the same from May 31,2019 to July 14, 2019 (duration of the tournament) and looked up the video results on the search engine. This led us to a Facebook post by Arab Times Kuwait on July 1, 2019. Captioned “#CricketWorldCup 2019 : Fight between #Afghanistan and #Pakistan Fans,” the post featured a nearly 12-minute-long-video.

Around 8 minutes into the video, we spotted the same footage that has now gone viral after the recent Pakistan Vs Afghanistan match in Asia Cup 2022.

The same Google search also led us to a report by The Sun, dated June 30, 2019, titled ‘HATE-BRAWL OVER Shocking new footage emerges of Pakistan and Afghanistan fans brawling during Cricket World Cup.’ Featuring visuals of the scuffle between the cricket fans of the neighbouring countries, the report stated “A handful of supporters try in vain to quell the attackers, but some Afghanistan fans even tried to break down the gates, pushing them against guards. Earlier, a plane with political messages flew over Leeds, sparking trouble outside the stadium. And flare-ups continued after the match, with hooligans captured on video throwing objects at each other in the stands.”

Around 26 seconds into a video carried by The Sun, we spotted the keyframes of the viral video.

We could thus conclude the viral video of brawl between Pakistan and Afghanistan cricket fans is around three years old and not related to the recent Asia Cup match. The incident took place during the ICC World Cup 2019 match between the countries in Leeds.

Reportedly, the ICC  had said in a statement that it was “aware of some scuffles among a minority of the fans” and that it was “currently working with the venue security team and the local police force, West Yorkshire Police, to ensure there were no further incidents.”

Viral video claiming to show a scuffle between Pakistan & Afghanistan cricket fans in a stadium is being shared out of context.