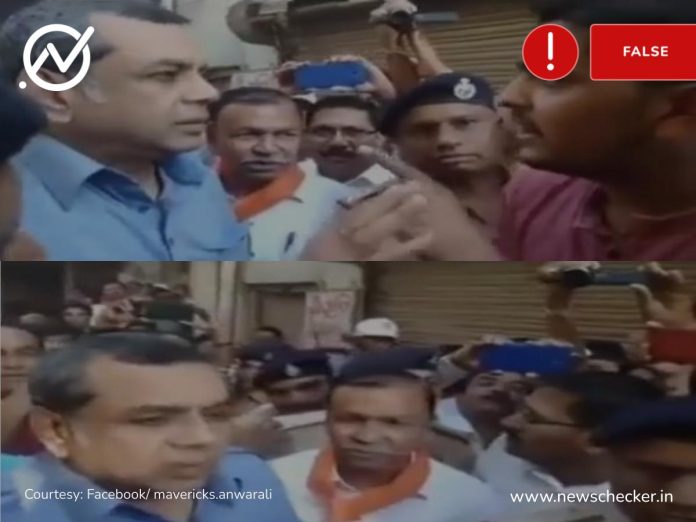 Veteran actor and BJP leader Paresh Rawal has been under fire since a video showing him making derogatory comments on Bengalis went viral. During an election rally in Gujarat’s Valsad, earlier this week, Rawal had said, “Gas cylinders are expensive, but their price will come down. People will get employment too. But what will happen if Rohingya migrants and Bangladeshis start living around you, like in Delhi? What will you do with gas cylinders? Cook fish for the Bengalis?”

After the video went rife, the actor apologised and ‘clarified’ that by “Bengalis” he meant  “illegal Bangladeshis and Rohingya.”

Soon after, another video showing Paresh Rawal apologising to a seemingly angry crowd gathered around him is being widely shared on social media platforms.

Some Twitter users shared the video with similar captions targeting the BJP on inflation and unemployment, while others posted the clip saying, “People of Gujarat showed Paresh Rawal his place.” Newschecker found that the video is old and unrelated to Rawal’s rally in Gujarat earlier this week.

On carefully analysing the video, we could hear Rawal saying in Gujarati, “I apologise to brothers, sisters… of the Rajput community.” Taking a clue, we conducted a keyword search for “Paresh Rawal,” “apologise Rajput community,” & “Gujarat” on YouTube which led us to a video uploaded by VTV Gujarati News and Beyond, dated November 26, 2017 , titled ‘ ‘Paresh Rawal compares royals with monkeys, apologises after protest.’

Around 30 seconds into the video, we spotted visuals of Rawal gheraoed by a crowd demanding an apology. On comparing the keyframes of the YouTube video with the viral footage, we found them to be from the same incident.

A YouTube video by News18 Gujarati, dated November 27, 2017, displayed the same visuals from a different angle

The description of the video read (translated from Gujarati), “…In the campaign meeting of Bharuch, Paresh Rawal apologised, the Rajput community registered a protest regarding his statement about Raja Rajwada…”

Furthermore, a Google search for “Paresh Rawal,” “apology,” & “Rajput” yielded a Times of India report, dated November 27, 2017. The report read, “Paresh Rawal has issued an apology after his alleged derogatory remark against royals was misconstrued by the Rajput community… While remembering Sardar Patel at a recent rally in Rajkot, the actor-turned-politician had compared the royals and music (raja vaja) to monkeys (vandra), which did not go down well with the said community…”

In a report, dated November 26, 2017, Business Standard stated, “Paresh Rawal has apologised for his alleged derogatory remark against royals after the Rajput community took it to heart. “My statement was not on the Rajput community. They are a splendor community in India and they make us proud. Nothing wrong will come out of my mouth against such a brave community,” Rawal told the media here. The actor-turned-politician, while remembering Sardar Patel at a recent rally in Rajkot, had compared the royals and music to monkeys, which did not go down well with the said community (sic).“

We also came across a tweet by ANI, dated November 26, 2017, carrying a still from the viral video, with the caption “I apologise unconditionally to all the members of Rajput community. I don’t know why I spoke those words. I never intended to hurt sentiments of any community: Paresh Rawal on his earlier statement allegedly comparing royals and music with monkeys.”

Different versions of the viral clip of Rawal apologising to the Rajput community were can be seen in YouTube videos uploaded in November 2017. Such videos can be seen here, here and here.

We could thus conclude that the viral video shows Rawal apologising to the public for making a remark against the royals, that offended the Rajput community, during a rally in Rajkot in November 2017. The video is being shared in a false context.

Viral video claiming to show Paresh Rawal apologising to “Gujarati people” who were angry at “BJP campaigner over inflation and unemployment” is false.

If you would like us to fact-check a claim, give feedback, or lodge a complaint, WhatsApp us at 9999499044 or email us at ch[email protected]. You can also visit the Contact Us page and fill out the form