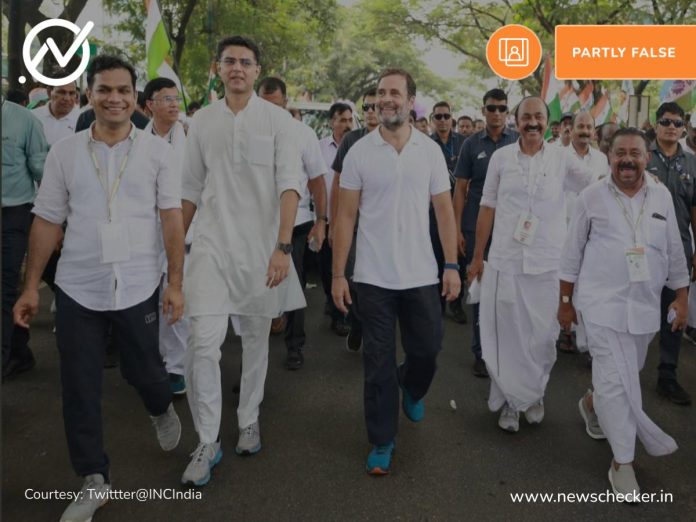 Following the pre-dawn raids on key Popular Front of India (PFI) members and their subsequent arrest by the NIA over alleged terror activities on Thursday, the group called for a shutdown in Kerala on Friday, September 23. While social media anticipated to receive visuals of the bandh, an early morning tweet by the Congress informing that today was a ‘rest day’ for its ambitious Bharat Jodo Yatra -which is currently in its Kerala leg- gained much traction online, with several users claiming that the Yatra was halted to support the PFI’s bandh. Newschecker found the claim to be misleading.

BJP Leader Kapil Mishra shared the INC tweet and wrote, “PFI and Islamic Jihadi organisations called for strike today and Congress stopped its padyatra today. Nothing can be more disgusting and shameful than this.” His tweet has garner  2,370 retweets and 6,140 likes so far.

Several other Twitter and Facebook users claimed that the Congress halted its Bharat Jodo Yatra because “PFI has declared Kerala Bandh today.”

A keyword search for “Bharat Jodo Yatra”, “Break,” and “Thrissur” on Google led us to a report by The Hindu, dated September 21, 2022 – a day before the bandh was called- titled ‘Bharat Jodo Yatra to enter Thrissur today.’ Elaborating on the Yatra’s Thrissur itinerary, the report stated “the yatra will tour the district from September 22 to September 25. It will take a break on September 23.”

We also came across a report by The New Indian Express, dated September 16, 2022, titled ‘Bharat Jodo Yatra: Rahul Gandhi takes break, talks to Congress workers.’ The report focussed on Yatra’s previous break on September 15, and added that it will take a break every eight days.  It also added that the next break day in Kerala will be on September 23.

Notably, the PFI has called a state-wide bandh today against NIA and ED crackdown on its top members that started on wee hours on Thursday, September 22, 2022, and their subsequent arrest. The call for bandh was also made on Thursday, while the Bharat Jodo Yatra’s bandh finds mentions in at least one-week-old reports.

In a response to a question over Rahul Gandhi’s likely Delhi visit amid Bharat Jodo Yatra, a September 21 report by Deccan Chronicle quoted Congress leader Jairam Ramesh as saying  “if he goes to Delhi, if he does it will be on the rest day on September 23 and to see his mother whom he has not seen for the last three weeks. If your mother is ill and she has gone for medical treatment, will you not go and see her?  See its personal situation. He is also a human being.”

Newschecker also reached out to Congress Political Office Committee Member M Liju who also dismissed the claim, and said that the schedule for the Yatra was made much before.  Liju, who is also a part of the Padyatra team, told us, “Even before the yatra started, the Kerala unit (of Congress) had published the schedule for the Yatra … As per the schedule, September 23, that is today, is an off day…It has nothing to do with the PFI bandh. It (schedule) was published much before..”

Newschecker Malayalam team was also able to access the schedule prepared by KPCC for Bharat Jodo Yatra. The itinerary shows September 23, 2022 as a leave day, as can be seen below.

Further, responding  to Kapil Mishra’s post (mentioned above), Congress’ Pawan Khera tweeted saying “Our this #Bharat_Jodo_Yatra  takes one day break every week. The last break was on the 15th. Now tell me, is it true that Mohan ji Bhagwat is about to travel on a journey to apologise to PFI?

Viral posts linking Bharat Jodo Yatra’s rest day to the PFI’s call for bandh on Friday are false. The schedule for Yatra was published days ahead of the bandh’s call.

Vasudha Beri
Vasudha noticed the growing problem of mis/disinformation online after studying New Media at ACJ in Chennai and became interested in separating facts from fiction. She is interested in learning how global issues affect individuals on a micro level. Before joining Newschecker’s English team, she was working with Latestly.
Facebook
Twitter
WhatsApp
Linkedin
Previous articleHere’s The Truth Behind The Viral SIM Swap Fraud
Next articleFrom OTT Regulation To Atma Analogy, Here’s A Look At Draft Telecom Bill