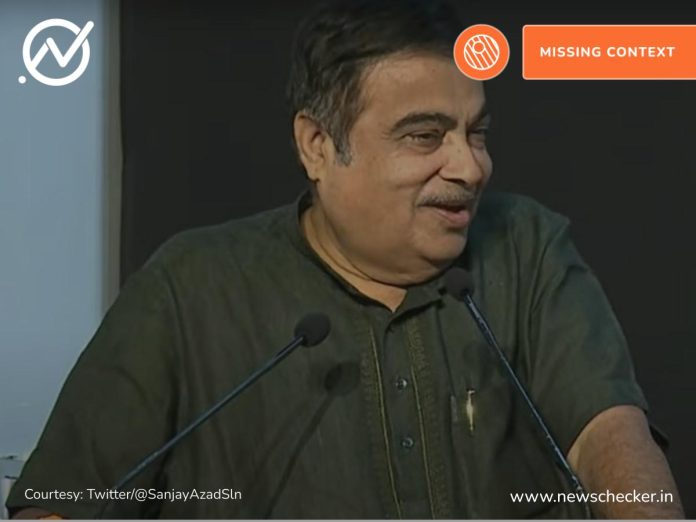 Days after Union Minister of Road, Transport And Highways, Nitin Gadkari was dropped from the BJP parliamentary board, a video, where he can be heard saying that he does not care about the ministerial position, is going viral on social media. However, Newschecker has found that the video has been edited with statements taken out of context from a speech made by Gadkari recently.

The video, shared by several users on Twitter, shows the minister speaking into microphones, seemingly at a dias of an event. In the beginning he is looking sideways indicating he is talking to others who attended the event/ gathering with him. Text superimposed on this video excerpt in Hindi, translates to  “I don’t care if I lose my ministerial post-Is Gadkari leaving the BJP?”

Dropping of Nitin Gadkari from the BJP’s parliamentary panel is indicative of their diminishing stock within the party, read an article in The Wire. According to another Times Of India report, Gadkari was dropped from the top BJP panel with the nod from the RSS top brass as he failed to heed warnings.

First, Newschecker closely analysed the viral video and found that the speech seems to have been edited together and is not in sequence.

Further Newschecker did a Google search with the words, “Gadkari” & “Don’t care if I lose my minister position”. The results threw up a few videos and an article which carried the same headline. The article, published by HW News, said that the minister made the comments while sharing anecdotes while launching the book “Naukarsyahi Ke Rang” written by Dr. Dnyaneshwar M. Mulay. We found a bio-data of Dr. Mulay on the website of the NHRC, which revealed that he served as a Diplomat in the Indian Foreign Service (1983 – 2019). He is a renowned Author, Motivator and former Secretary to the Government of India and is also a serving member of the NHRC.

Using this as a clue, Newschecker conducted a keyword search on YouTube, and found Gadkari’s full speech from the event, which was live streamed on August 23, 2020. The clothes worn by the minister were the same as those seen in the viral video, confirming that it was from the same event. On listening to the speech carefully, we found the portion of the speech that is going viral.

Seven minutes into the speech, Gadkari can be heard explaining the difference between the letter and the spirit of the laws. Recalling an incident from his tenure as the PWD minister during the 1995 BJP-Sena government in Maharashtra, Gadkari recalled an incident  regarding the Melghat Tehsil in Amaravati. “2,500 children died of malnutrition which triggered a wave of shock across the world. The then CM, Manohar Joshi, wondered at the situation, and asked me “There are around 450 villages in Melghat, and not one of them has roads. What sort of a situation is this? How will these people live like this.”

Narrating how the chief conservator of forest at the time had stopped all development work in the region under the Forest Act, Gadkari quoted the then chief minister Manohar Joshi, “There are no roads in the area. Don’t you feel bad about this? The kids are dying of malnutrition, they are not able to attend schools and farmers are not able to take their produce to the markets. There is no electricity line and you have stopped all the work under the Forest Act. How can you not feel anything about this? But the chief conservator replied that he was helpless.”

He then went on to say, “Manohar Joshi was dejected. I told him, sir, this is not something you can do. I am good at this sort of thing. Leave it to me, I won’t care what happens. I will get this job done. If you can, stand with me, or don’t. I am not worried about my position. If I lose my ministership, then I lose it.” This portion was taken out of context and used in the viral video.

Gadkari then goes on to narrate how he cleared the project for building roads in the area, violating the Forest Act, over ‘humanitarian reasons’ and took up personal responsibility for the decision. “I wrote this down and gave it to my secretary Tambe, who was astonished that I took such an undertaking. I told him that I was not here to make a career out of politics and that I was ready to face the consequences (main rajnitik peshawar nahi hun aur jo hoga, dekha jayega).”

At one point he can even be heard saying, “I am not dwelling more on this, the media has a habit of misconstruing what I say.”

Referring to the experience of the writer Dr. Dnyaneshwar M. Mulay, Gadkari said, “One gets to learn a lot from experience. No one has the patent to learn. I often tell people that I am an ordinary person, one who grew up eating at the footpath and watching movies in 3rd class, and seeing dramas from the backstage area. When Z+ security guards come, after sending them off, I step out on the footpath. It reminds me of who I am (mere aukat ki yad dilate hai).” This portion of the speech has also been featured in the viral video, without context.

The minister also tweeted slamming the “fabricated campaign” against him for political mileage.

On listening to the complete speech of Nitin Gadkari, we understand that certain portions of the minister’s speech have been used out of context and edited together to give the impression that he was expressing dissatisfaction with the BJP over being dropped from the BJP parliamentary board.

Pankaj Menon
Pankaj Menon is a fact-checker based out of Delhi who enjoys ‘digital sleuthing’ and calling out misinformation. He has completed his MA in International Relations from Madras University and has worked with organisations like NDTV, Times Now and Deccan Chronicle online in the past.
Facebook
Twitter
WhatsApp
Linkedin
Previous article
Hot Pineapple Water Will Not Cure Cancer, Viral Claim Is False
Next article
West Bengal Police Assaulting ISKCON Devotees? No, Viral Video Is Of 2008 Goa Scuffle