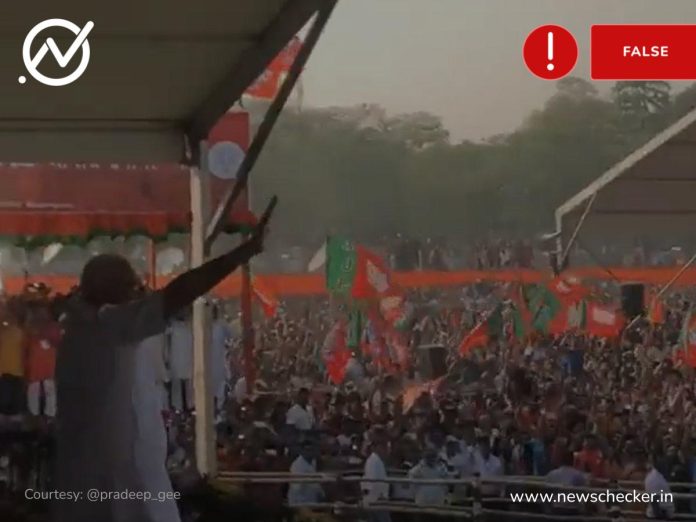 Several BJP leader were caught in a tight spot on Saturday after being called out by fact checkers for sharing an old video of PM’s 2019 Kolkata rally as a recent one. BJP IT cell head Amit Malviya, TN BJP IT cell head G Pradeep, and BJP leader Priti Gandhi were among those who tried to pass off the 2019 video as recent. While G Pradeep, like Amit Malviya, claimed that the video was from a recent event in Mangaluru, Priti Gandhi claimed that the video was from Gujarat’s Kutch.

Also Read: Shivaji-Inspired Naval Ensign: All You Need To Know And A Case Of Due Credit

The video, showing a huge crowd cheering and chanting the Prime Minister’s name, was first tweeted by Priti Gandhi, on August 28. In  her tweet, Gandhi wrote “This is the rousing welcome that the people of #Kutch gave our Honourable Prime Minister @narendramodi ji today. Unimaginable fervour!! #KutchWelcomesPMModi” The tweet was in context of the Prime Minister’s visit to Kutch to lay the foundation stone for several developmental projects in the run up to the Gujarat polls, slated for later this year.

Later, on September 2, Amit Malviya tweeted the same video, with the caption “Energy. Enthusiasm. #Mangaluru”. This tweet was in context of the PM’s recent visit to Mangaluru on September 2, 2022, to lay the foundation stone for developmental projects worth ₹3,800 Crores.

Later in the evening, the same video was also tweeted by Pradeep G, the IT wing head of BJP Tamil Nadu, with the caption, “PM Modi received grand welcome in Mangalore @narendramodi”. The archived version of this tweet can be seen here.

The contradiction was enough to draw the attention of fact checkers, who flagged it on social media. Newschecker looked up the facts of the video. Here’s what we found

To verify the video, Newschecker began by conducting a reverse image search of the keyframes of the video tweeted by BJP’s official handle, @BJP4India, on April 3, 2019. The tweet revealed that the rally took place in Kolkata.

Using this as a clue, Newschecker conducted a keyword search on the words “PM Rally Kolkata” on the specific date range, and found many reports. A report of the same event published on India Today reads, “Today (April 3) was PM Modi’s rally at Brigade Parade Ground. There were BJP’s saffron flags, buntings, Modi masks all over the rally ground. Modi chants in the air kept buzzing at frequent intervals, but the slogans were strong reminders of the calls one often heard at Mamata Banerjee’s Trinamool Congress rallies. Even Mamata bashing had taken a leaf out of Mamata’s sloganeering.”

Furthermore, Amit Malviya and Priti Gandhi had both shared the video in 2019, both confirming that the video is from PM’s 2019 Kolkata rally.

We further found the same video tweeted by the Prime Minister’s twitter handle, @narendramodi_in, also published on the same date, establishing that the event was from PM’s 2019 Kolkata rally.

Pankaj Menon
Pankaj Menon is a fact-checker based out of Delhi who enjoys ‘digital sleuthing’ and calling out misinformation. He has completed his MA in International Relations from Madras University and has worked with organisations like NDTV, Times Now and Deccan Chronicle online in the past.
Facebook
Twitter
WhatsApp
Linkedin
Previous article
Weekly Wrap: Misinformation Around IND Vs PAK, False Communal Claims & More
Next article
Did Rahul Gandhi Say Wheat Was Sold In Litres? Viral Video Excerpt Does Not Show Full Story