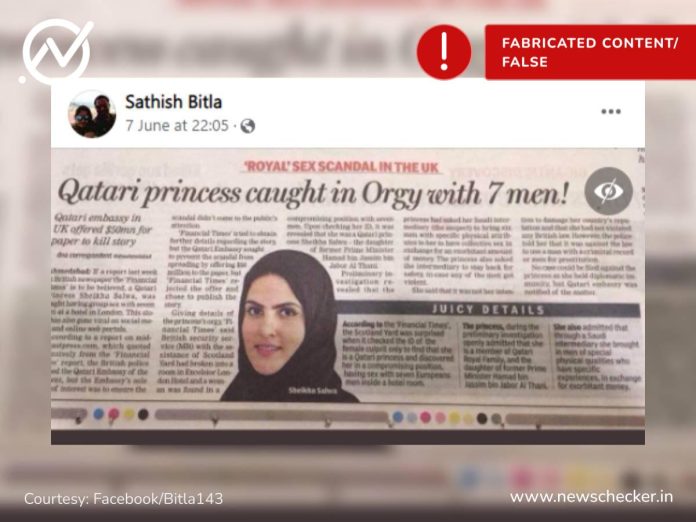 Facebook user Satish Bitla is among the many users who shared the claim on the social media platform.

Newschecker also found an article by AWD News published on 14th August, 2016 titled ‘Qatari Princess Shaikha Salwa’s Sexual Scandal With Seven Men’ which has since been deleted from their website. The article named Financial Times as their primary source.

The archived version of the article can be seen here.

Upon further investigation, Newschecker found a tweet by the official account of Twitter user @Lobnene_Blog who is a Social and political activist who works for Al Araby TV network. According to the tweet, the woman in the news clipping is not Qatari princess Sheikha Salwa but rather Alia Al Mazrouei, COO of Dubai based Mazrui Holdings and profiled by Forbes.

On comparing the viral photo and the photo of Mazrouei, we found them to be a match, proving that she was being falsely misidentified as Qatari Princess Sheikha Salwa.

Newschecker also found the same image used in the viral social media post on a website called www.thosewhoinspire.com . According to the website, the woman in question is Alia Al Mazrouei who is the Chief Operating Officer of Mazrui Holdings and the co-founder Just Falafel.

Newschecker also found the image of the same woman featured on the website of the Abu Dhabi School of Management, where she is a Board Member.

The claim had earlier gone viral in 2016 and after that in 2020 and was fact checked by many media houses, including the Urdu team of Newschecker. You can read the Urdu article here.

Newchecker’s investigation reveals that the viral news clip claiming that Qatari princess Sheikha Salwa was involved in a sex scandal with 7 other men is false and the image used in the news clipping is not of Sheikha Salwa but rather Alia Al Mazourei who is a business woman based out of Dubai.

Vaibhav Bhujang
Vaibhav is a part of Newschecker’s English team, where he spots and debunks all kinds of misinformation, making the rounds on the internet. A Journalism graduate from St. Xavier's College, Mumbai, he holds an M.A degree in Philosophy and an M.Phil from Delhi University.
Facebook
Twitter
WhatsApp
Linkedin
Previous articleMoeen Ali’s Viral Tweet On Boycotting IPL “Fake”, Confirms ECB
Next articleQatari Anchor Fatima Shaikh Concerned About India’s Religious Freedom? No, Photograph Shows Anchor From Afghanistan