A message went viral after RBI imposed restrictions on the PMC Banks. The message says that RBI is going to discontinue and close 9 national banks. These banks are Corporation Bank of  India, UCO Bank, IDBI Bank, Bank of Maharashtra, Andhra Bank, Indian Overseas Bank, Central Bank of India, Dena Bank, United Bank of India. It is also mentioned in the message that the supreme court has ordered the account holders of these banks to withdraw their money as soon as possible. One of our readers forwarded us the same message and asked us for verification.

We quickly checked the official website of RBI, to see if they have published any such notification. RBI has issued a notice two years ago on undergoing Prompt Corrective Action but has not mentioned the closing of these banks. With the help of Google, we found a news report on FirstPost, according to which there have been rumors about RBI shutting down 9 national banks but RBI never issued a notice regarding the same. Some of the banks mentioned above are undergoing Prompt Corrective Action (PCA) under the direction of the Reserve Bank of India (RBI). That is a normal process when bad loans in a particular bank rise above a certain level and capital ratios weaken, the RBI puts certain restrictions on such banks asking them not to take further big loan exposures and instead take measures to cut down their NPAs and preserve capital but that does not affect the account holder.

IDBI has sent messages to its account holders to not fall for such fake news. 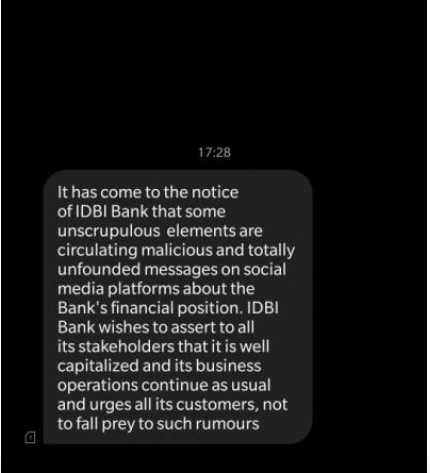 RBI’s recent tweet has put this rumor to an end.

Reports appearing in some sections of social media about RBI closing down certain commercial banks are false.

Though Newschecker couldn’t find the source of this message but this might have triggered after the government had announced that 10 public sector banks would be merged into four bigger banks.