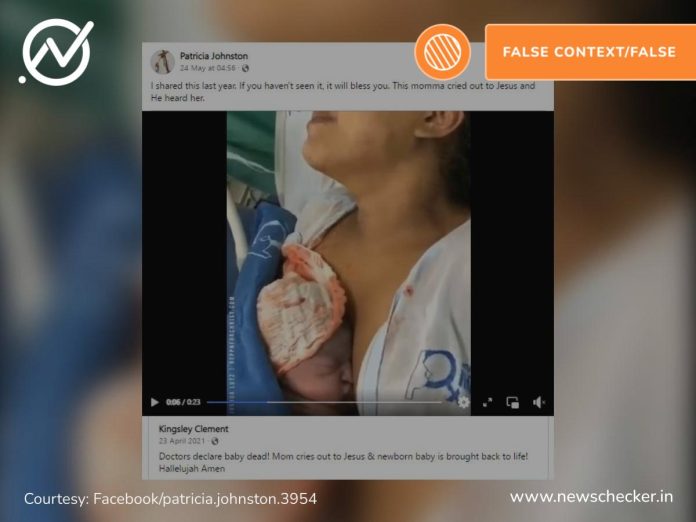 A video of a mother clutching an immobile newborn infant close to her chest, while praying fervently, is going viral on social media. Users claimed that the baby, declared dead by the doctors, was brought back to life again after the mother’s prayers to Jesus Christ. Newschecker found these claims to be untrue.

The video has been shared by a Facebook page called ‘GospelLift Channel’ which is a Christian Facebook page based out of Lagos, Nigeria, and has 138,269 followers. The video has garnered 9,800 views and 999 likes and has been shared along with the caption ‘Doctors declare baby dead! Mom cries out to Jesus & newborn baby is brought back to life! Hallelujah praise God..’

To verify the authenticity of the claim, we started by reverse searching the keyframes of the video on Google and found that the video had been viral on Facebook in 2020 as well, some of the posts can be seen here and here.

Newschecker also found that the video had been posted on the Youtube channel called ‘Uéliton Costa News’ along with the description which after translating from Portuguese via Google translate said that “the video circulating on social media showing a baby, who had been born stillborn, coming back to life and crying after mother’s prayers, is Fake News. The Hospital Foundation of Feira de Santana, a Municipality that manages the Hospital Inácia Pinto dos Santos (Women’s Hospital), clarified that the information is not true. The child was not stillborn.” The description also mentioned that the video was from Bahia in Brazil.
Using this as a clue, Newschecker conducted a keyword search with the words “Feira de Santana”, “still born baby” and “prayer” and found news report on Acorda Cidade and Macajuba Acontece that relayed the same information.

Upon further investigation, Newschecker found a press statement issued by the Fiera De Santana Hospital Foundation which states that “A video circulating on social media showing a baby, who was allegedly been stillborn, and came back to life after the mother’s prayers, is Fake News. The Hospital Foundation of Feira de Santana, a Municipality that manages the Hospital Inácia Pinto dos Santos (Women’s Hospital), clarifies that the information is not true. The child was not stillborn. According to information from the Maternal and Child Complex at Inácia Pinto dos Santos Hospital, the newborn was delivered naturally this weekend and is doing well in the mother’s arms”. Further, the Hospital management said, “When the mother began to pray in gratitude for her son’s life, the baby began to cry. After analysing the published video, Fundação Hospitalar clarifies that it was all Fake News”.

Newschecker’s investigation reveals that the video of a still born baby allegedly brought back to life by the mother’s prayers is false.  The baby was not stillborn and was crying after the mother started reciting prayers while holding the baby.

Macajuba Acontece report, IS FAKE! Video of Baby given up as dead “resurrects” after prayer in Feira de Santana

Vaibhav Bhujang
Vaibhav is a part of Newschecker’s English team, where he spots and debunks all kinds of misinformation, making the rounds on the internet. A Journalism graduate from St. Xavier's College, Mumbai, he holds an M.A degree in Philosophy and an M.Phil from Delhi University.
Facebook
Twitter
WhatsApp
Linkedin
Previous articleQatari Anchor Fatima Shaikh Concerned About India’s Religious Freedom? No, Photograph Shows Anchor From Afghanistan
Next articleOld Images Linked To Recent Vandalism Of Karachi Hindu Temple