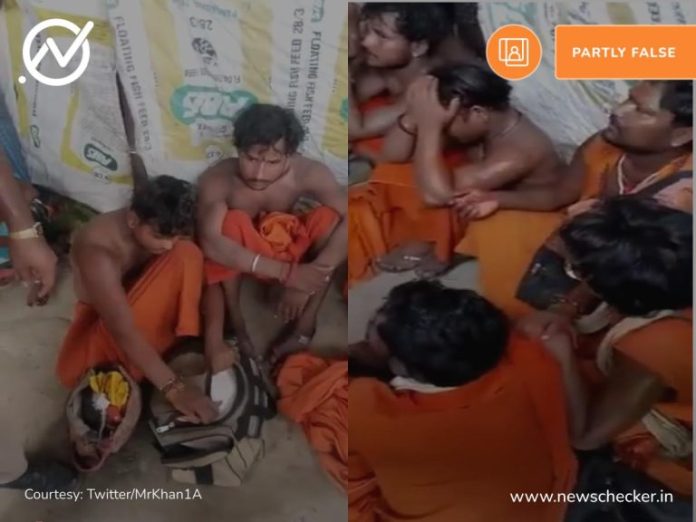 (This article was originally published in Newschecker Hindi by Saurabh Pandey)

Amid rumours of child kidnapping gaining massive traction in the recent days, many videos made for awareness purposes are being shared widely on social media, with users believing them to be real. In this context, a video is going viral showing 28 Sadhus allegedly caught by Varanasi police for kidnapping children and selling their kidneys. In the video, a voice in the background narrates that 28 sadhus dressed in saffron, who abducted the children and sold their kidneys in the Birapatti village of Banaras, were allegedly detained and will be sent to jail for additional proceedings. Newschecker found these claims to be not true.

The video has been shared on Twitter by user @MrKhan1A which has garnered 6,585 likes and 3,732 retweets and is being shared along with the caption ‘28 Sadhus Caught Red Handed Selling Children’s Kidneys @Uppolice. What’s going on in Uttar Pradesh. Who will answer this? Sometimes Barabanki and sometimes Varanasi from everywhere Children are being stolen, their kidneys are removed and  body being thrown into the woods.’ when translated via Google translate.

We started our investigation by conducting a keyword search with the words “28 sadhus caught kidnapping children for  kidneys in Varanasi” and found a report by Dainik Bhaskar titled ‘Rumours about stealing a child and removing kidney: Varanasi rural police said – will take action against those who share misleading videos’ when translated via Google translate, uploaded on their website on 6th September, 2022.

According to the report, brought in some sadhus asking for alms for interrogation as rumours were spreading in Varanasi about sadhus involved in child kidnapping. The report further stated that the police said they had interrogated the sadhus on their name, address and criminal history and released them after being satisfied with the results. The report makes it clear that the sadhus were not involved in child kidnapping.

Based on information from an article published by Dainik Bhaskar, we turned to the Twitter handle of Varanasi Police, where we came across several tweets that have discredited the viral claim.

According to the statement issued by the official handle of rural unit of Varanasi Police, “A video is being circulated on certain social media platforms, which is being falsely believed to be from village Birapatti of Varanasi rural, where some sadhus were caught taking out the kidneys of children. The reality is that on 01.09.2022, all the sadhus were brought to the police station and interrogated after the villagers suspected the sadhus who were asking for alms by roaming in village Indrawar of Baragaon area. All their names and addresses were verified from their place of residence during interrogation and no criminal history was found on them.”  The statement further said, “The video, which is now popular on social media, is not from Varanasi Rural. Varanasi Rural Police refutes the above misleading video. Please do not spread rumours by posting misleading otherwise strict action will be taken against the concerned.”

Upon conducting a keyword search on Youtube with the words ‘sadhus’ ‘child’ and ‘Varanasi’ we found a video which shows a dialogue between the sadhus and the police and the villagers.

For further clarification about the viral video, we talked to the station head of Baragaon. He told Newschecker that “these men usually come to Baragaon after catching a train from Chitrakoot and then take a tempo (autorickshaw) to beg for alms at local places. 6 people had reached Birapatti village to beg for alms, where the villagers raised doubts on them, after which they were thoroughly investigated, and subsequently released. Some anti-social elements have presented this matter in a wrong way. Police are taking action against those spreading false information.”

Rise in rumours about child theft; UP Police made an important appeal to the citizens

Significantly, in the last several days, there have been reports of spreading rumours of child theft from many districts of Uttar Pradesh. Most of these cases are related to beatings or chaos over the rumour of child theft. In many of these cases, the police are also taking action against those who spread misleading information and beat them up. Apart from this, the police are talking to the public in the rural areas and appealing not to believe in such rumours. Newschecker found several tweets by the police in Uttar Pradesh regarding the spread of rumours and misinformation.

Police from other parts of Uttar Pradesh also tweeted responses to users to curb the spread of rumours.

Newschecker’s investigation reveals that the claim that children’s kidneys are being stolen and their lives taken by 28 sadhus in Varanasi is false. The video is from when some sadhus went to ask for alms in Beerapatti, Varanasi and were apprehended by the local villagers on rumours of child kidnapping. The local police interrogated the sadhus and later released them after finding no irregularities.

Vaibhav Bhujang
Vaibhav is a part of Newschecker’s English team, where he spots and debunks all kinds of misinformation, making the rounds on the internet. A Journalism graduate from St. Xavier's College, Mumbai, he holds an M.A degree in Philosophy and an M.Phil from Delhi University.
Facebook
Twitter
WhatsApp
Linkedin
Previous article
Rajnath Singh Slams PM Modi Over Price Rise? 2013 Speech Against Manmohan Resurfaces
Next article
Value Of Indian Passport Increased Under PM Modi? Here’s What We Found