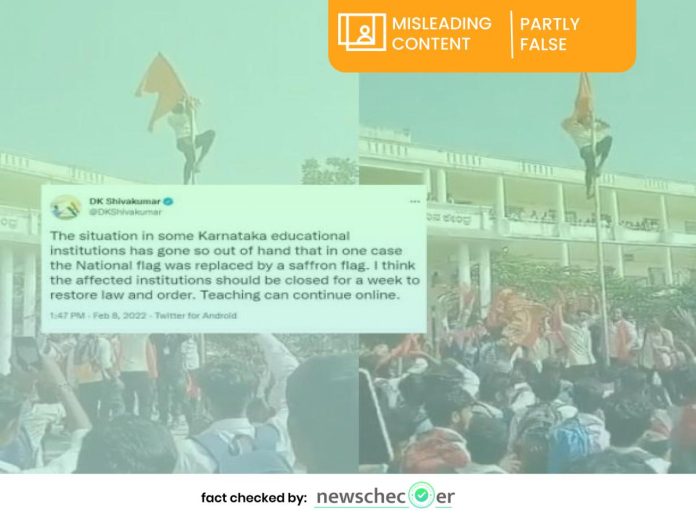 Karnataka has become a battleground for the ‘Hijab Vs Saffron-shawl’ protest. Last month, some Muslim students were denied entry in a government school in Udipi district for wearing Hijab. Similar action was taken by several other schools in the region soon after, following which a group of students, to mark their protest against Hijab, turned up to class wearing saffron shawls.

Things escalated soon with protests spilling to several parts of the state, and turning violent, resulting in CM Basavaraj Bommai ordering the closure of all high schools and colleges on February 9, 10 and 11. It is in this backdrop, a video is going viral on social media with a claim that India’s national flag was replaced with a saffron flag at a government college in Shivamogga.

Congress leader DK Shivakumar was among several social media users who made this claim.

Newschecker also received the same claim on our WhatsApp tipline (+91-9999499044) requesting to be fact checked.

What’s The Protest About?

A group of girls wearing Hijab were barred from entering the Bhandarkars’ College of Kundapur of Udupi district last week. The principal cited the government’s order and the college’s guidelines on uniform dress code for the action, but the students, refusing to step down, continued to register their protest, by standing outside the college in hijab. Meanwhile, a set of Hindu students came to class wearing saffron shawls to ‘protest’ against Hijab.
Two other private colleges in Kundapur — Bhandarkars’ Arts and Science College and Dr BB Hegde First Grade College — also disallowed students wearing hijab to enter the college soon enough

The Hijab vs saffron shawl protest escalated over the month in different parts of the state. The mob turned violent in several cities and incidents of stone pelting were reported in Banhatti on Tuesday. While at Government First Grade College  in Shivamogga, a group of boys wearing saffron shawls chanted “Jai Shri Ram” and one of them climbed a flag staff and hoisted a saffron flag.

Amid the widespread protests, Karnataka CM Basavaraj Bommai has ordered closure of all high schools and colleges on February 9, 10 and 11. Meanwhile, a plea by the Muslim students against the hijab ban in classrooms is pending before the Karnataka High Court.

To verify if the national flag was really replaced by a saffron flag at a Shivamogga college, Newschecker contacted Dhananjaya BR, the principal of the Government First Grade College in Shivamogga who dismissed the claim and said that the flag post was empty when the boy hoisted the saffron flag. “The college hoists the national flag only on Republic Day and Independence Day,” he added.

The principal also shared an image of the campus with Newschecker wherein the flag staff can be seen empty, proving that the national flag was not at the poll when the boy hoisted the flag.

We also reached out to Shivamogga SP BM Laxmi Prasad who also dismissed the claim. “No, that’s not true. The pole didn’t have any flag. They put one saffron flag and were made to remove it later,” the SP told Newschecker.

We also came across a video posted by Journalist Imran Khan on his official Twitter account where SP Prasad can be heard denying that the national flag was lowered.

Newschecker further looked up images and videos of the Government First Grade College in Shivamogga with the help of Google Maps and found the flagpole empty in most of the pictures.

The claim that the national flag was taken down and instead, a saffron flag placed on the  flagpole at the Government First Grade College in Shivamogga is misleading. The pole was empty when the boy hoisted the flag.

Vasudha Beri
Vasudha noticed the growing problem of mis/disinformation online after studying New Media at ACJ in Chennai and became interested in separating facts from fiction. She is interested in learning how global issues affect individuals on a micro level. Before joining Newschecker’s English team, she was working with Latestly.
Facebook
Twitter
WhatsApp
Linkedin
Previous article
Uttar Pradesh: How Far Did Yogi Administration Take The State On The Path Of Progress?
Next article
Image Showing BJP Flags In A Dustbin Is From 2018