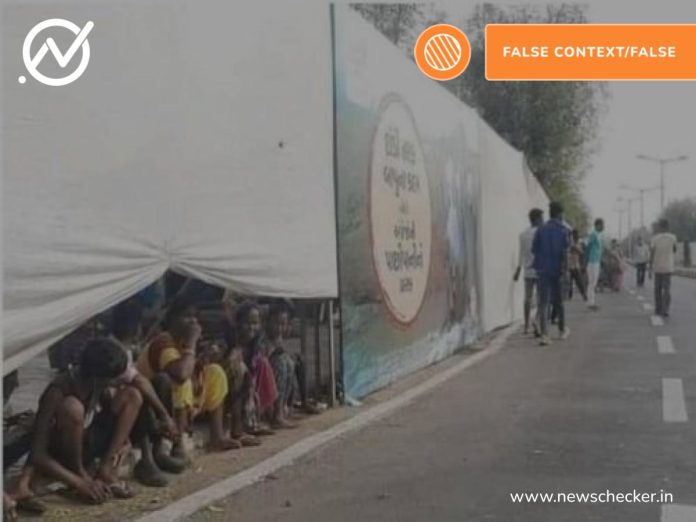 UK Prime Minister Boris Johnson was in Ahmedabad for a two-day visit to India last week. In this background, an image of a slum partially covered in white cloth is doing the rounds on social media platforms. Newschecker found the image to be old.

Several Twitter users shared the image claiming that it relates to the recent visit of Johnson to Gujarat.

Facebook user Arindam Chaudhuri was among the many who shared the image which shows some people crouched at the periphery of a slum that has been partially covered with a white cloth.

UK PM Johnson met his Indian counterpart in New Delhi on April 22. According to the India-UK joint statement in this regard, both the leaders “welcomed the intensification of bilateral engagements since the Virtual Summit and the positive momentum in cooperation across the full spectrum of bilateral relations. As the world recovers from the COVID-19 pandemic, both leaders reiterated the need to focus on sustained economic recovery and work towards building national resilience and trusted partnerships to mitigate external disruptions.”

In Ahmedabad, Johnson visited the Sabarmati Ashram and tried his hands at spinning the charkha. He also visited a JCB manufacturing plant near Halol in Panchmahal district.

To verify the veracity of the claim, Newschecker conducted a Google reverse search and found that the image was posted by Facebook user ‘Shivam Agaarwal’ in the comment section of a post by BJP leader Sambit Patra on March 12, 2021, confirming that the image is not related to Johnson’s recent visit to Gujarat.

Our Gujarati team confirmed that the text written on the banner says, ‘Bapu’s steps towards Dandi, Britisher take back steps.’

Further, we found that the image was posted by Ahmedabad Mirror on its official Twitter handle on March 12, 2021, with the caption, “Slum residents of #ParikshitNagar in #Ahmedabad peep from the covers that block their view of the route to #SabarmatiAshram. PM @narendramodi  is expected to begin the 75th anniversary of India’s #Independence #Day #celebrations.”

According to a release by the Ministry of Culture, “The Prime Minister, Shri Narendra Modi flagged off the ‘Padyatra’ (Freedom March) from Sabarmati Ashram, Ahmedabad and inaugurated the curtain raiser activities of the ‘Azadi Ka Amrit Mahotsav’ ([email protected]). Governor of Gujarat Shri Acharya Devvrat, Union MoS (I/C) Shri Prahalad Singh Patel and Chief Minister of Gujarat Shri Vijay Rupani and Gandhi Ashram trustees were among those present on the occasion.”

Our investigation reveals that the viral image of a partially covered slum is old and unrelated to the recent visit of UK Prime Minister Boris Johnson.

Vasudha Beri
Vasudha noticed the growing problem of mis/disinformation online after studying New Media at ACJ in Chennai and became interested in separating facts from fiction. She is interested in learning how global issues affect individuals on a micro level. Before joining Newschecker’s English team, she was working with Latestly.
Facebook
Twitter
WhatsApp
Linkedin
Previous article
Oil Bonds Responsible For Sky Rocketing Fuel Prices? No, Viral Claim Is Misleading
Next article
No, This Is Not The Mahameru Flower That Blooms Only Once In 400 Years