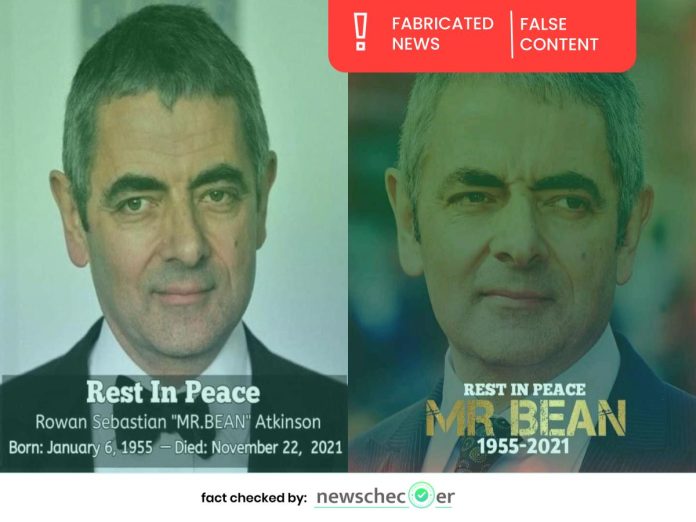 Social media posts claiming the death of British actor Rowan Atkinson, famously known as ‘Mr. Bean’ are being widely shared on both Twitter and Facebook. Newschecker contacted the actor’s management team and found the actor is alive but the rumours of his death are both frequent and baseless.

Known for the sitcom Mr. Bean and his performance in the comedy movie ‘Johnny English’ Atkinson was listed as one of the funniest actors in British comedy in 2007 by the British newspaper, The Observer.

The claim is also widely shared on Facebook with fans from India and across the world expressing grief over the news of Atkinson’s death.

To check if claims on Rowan Atkinson’s death are true, Newschecker ran a keyword search on Google and found no authentic sources confirming the news of his death but conversely found news reports saying Atkinson is alive (here, here, and here).

Further on contacting PBJ management, the talent management agency representing Atkinson, we found the claim to be fabricated.

‘We can confirm there’s no truth in these rumors,’ said PBJ management in an email to Newschecker.

Claims of Atkinson’s death are frequently shared on social media. Media organizations have debunked similar claims on his death several times including in 2012, 2016, 2017, and in June 2021.