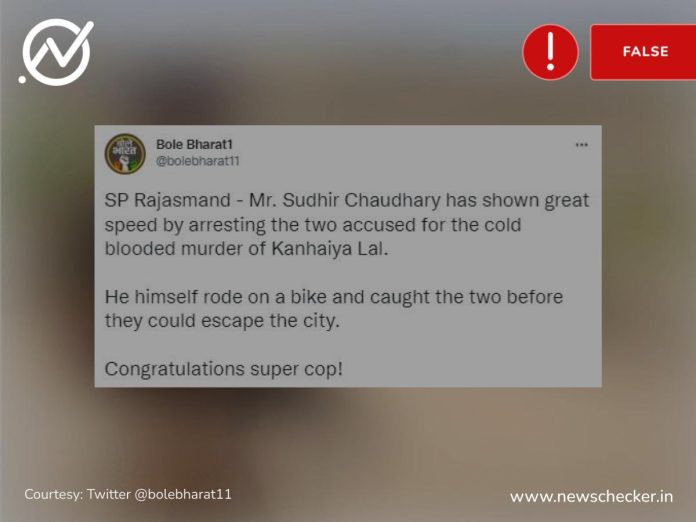 Following the arrest of accused in the connection to the gruesome murder of Udaipur tailor Kanhaiya Lal last week, several social media users shared a post claiming that Rajsamand SP “Sudhir Chaudhary himself rode on a bike and caught the two before they could escape the city.” They also lauded the “super cop” who showed “great speed  by arresting the two accused for the cold blooded murder of Kanhaiya Lal.” Newschecker found the claim to be untrue.

Kanhaiya Lal, a Udaipur-based tailor, was beheaded by two persons in broad daylight at his tailoring shop on June 28. The accused, identified as Riaz Akhtari and Ghouse Mohammad, allegedly killed Lal over his social media post extending support to suspended BJP spokesperson Nupur Sharma amid widespread protests against her controversial remarks against the Prophet during a television debate. Akhtari and Ghouse were arrested to the same day.

The National Investigative Agency (NIA) court on July 2 remanded in 10-day police custody the four people, including Riaz Akhtari and Ghouse Mohammad, arrested in the murder case. Meanwhile, five were arrested in separate cases in Hanumangarh district on Monday for allegedly circulating the video of the incident, and posting photos and videos with arms on social media.

Newschecker began by ascertaining where and how the two accused in the Udaipur murder case were arrested. A keyword search for “Main accused Udaipur Murder Arrested” on Google which led us to a report published in NDTV dated July 2, 2022, with the title ‘Udaipur Tailor Murder: Two Accused Sent To 14-Day Judicial Custody.’ The report stated that the two accused in Udaipur murder case, Riaz Akhtari and Ghouse Mohammad,  were caught in Rajsamand district’s Bhim area hours after the crime while they were riding a motorcycle.

We looked up for more reports on the arrest of the two accused and found a YouTube video by BBC Hindi, dated June 29, 2022, with a caption which roughly translates to “Udaipur Murder: Rajasthan Police tells how they caught the accused?.” The video carried visuals showing the arrest of the accused duo.

What the video shows

A group of men can be seen seemingly holding two men on an empty road when a car is seen entering the scene. The passengers from the car, more police officials, can be seen getting down and joining the group. Soon after, a bike and two other cars can be seen arriving at the scene.

The report also carried a video byte of ADG Law and Order Hawa Singh Ghumaria in which he can be heard saying, “They went to the tailor’s shop, gave measurement and then killed him. After the murder they left the place on a bike and moved towards the Rajsamand road.. But soon, it was known which bike they were on…. So a team started following them while the Rajsamand SP put blockades and the Rajsamand team arrested the duo from the Bhim area.”

While ADG’s statement makes it clear that the Rajsamand police team arrested the accused, there was no mention of SP Choudhary himself riding the bike and arresting the duo.

We searched for more reports detailing the arrest of Riaz Akhtari and Ghouse Mohammad, but did not find any article sustaining the claims about Rajsamand SP.

More reports on the arrest of the accused duo can be found here, here and here.

Out of term promotion for 5 policemen

In a tweet dated June 29, 2022, Rajasthan CM Ashok Gehlot announced that out-of-term promotion will be bestowed to five policemen, “Mr. Tejpal, Mr. Narendra, Mr. Shaukat, Mr. Vikas and Mr. Gautam, who made quick arrests of the accused involved in the Udaipur incident.”

There was no mention of SP Choudhary in the same.

Further, Newschecker contacted Rajsamand SP Choudhary who clarified that it was his team who caught the accused, not personally him, and that he was coordinating and giving directions to them. He told us that he was “obviously not on the bike.”  SP Choudhary further said, “I was not personally there. This part of the district is little far from my headquarters so I was on the way, so I reached halfway then we took the accused to Charbhuja police station. I interrogated them. Interrogation was my role.”

Viral social media posts, that claim Rajsamand SP Sudheer Choudhary himself  “rode a bike and caught the accused” in Udaipur murder, is misleading. It was his team who arrested the accused duo.

Vasudha Beri
Vasudha noticed the growing problem of mis/disinformation online after studying New Media at ACJ in Chennai and became interested in separating facts from fiction. She is interested in learning how global issues affect individuals on a micro level. Before joining Newschecker’s English team, she was working with Latestly.
Facebook
Twitter
WhatsApp
Linkedin
Previous articleNupur Sharma Case Judge Justice J.B. Pardiwala Was A Congress MLA? No, Viral Claim Is False
Next articleVideo Of Woman Spitting On Cops Is Not Activist Teesta Setalvad