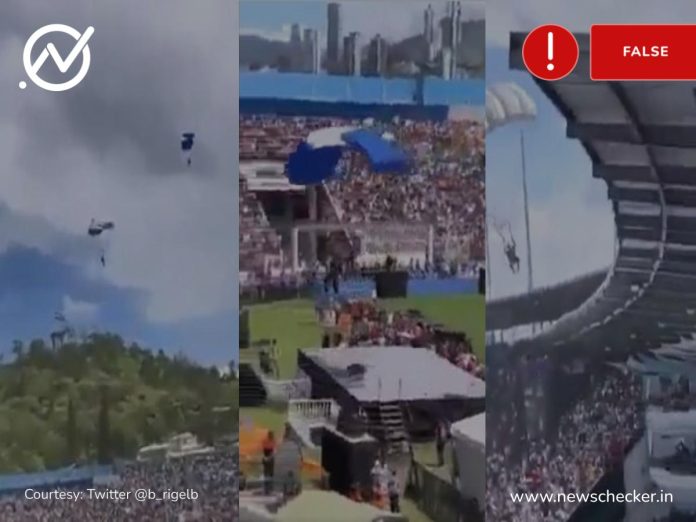 To commemorate its 60th anniversary of independence from Britain, East African country Uganda orchestrated a series of celebratory events under the theme “October 9: a declaration of African interdependence and our shared destiny.” In this context, a video showing a failed landing by four airborne paratroopers’ in a stadium swamped with onlookers is going viral on social media platforms. While three parachutes can be seen crashing into the public, one ends up in what appears to be a wooden box on the field. Those who shared the video claim to show visuals from Uganda’s independence Day celebrations. Newschecker found the claim to be untrue.

Links to such tweets can be seen here, here and here.

We conducted a Google reverse image search on the keyframes of the viral video which led us to an article by eBaum’s World, dated October 11, 2022, titled ‘Group of Paratroopers Make the Worst Entrance of All Time.’ Carrying the viral video, the article stated, “…many people seem quite sceptical that this video comes from Uganda, with one user on Reddit claiming with confidence that these troopers are in fact from Honduras. “

Taking a clue, we conducted a keyword search for “Honduras Paratroopers” on Google which yielded a report by Daily Mail, dated October 13, 2022, titled ‘Honduran special forces display goes horribly wrong as four parachutists crash in front of screaming crowds with one slamming into toilets and another left dangling on stadium roof.’

Displaying pictures from Honduras’ Independence Day celebrations, the report elaborated that the chaos unfolded during the celebrations on September 15 as 40 paratroopers leapt out of helicopters from 6,500 feet to land in front of screaming, awestruck fans at the José-de-la-Paz-Herrera stadium in the city of Tegucigalpa… But strong winds ended up blowing the experienced skydivers drastically off their intended course in a way that was fortunate not to end in tragedy.”

On comparing the images in the Daily Mail report with the keyframes of the viral video, we could conclude that they were from the same event.

Honduras, officially Republic of Honduras, is a country in Central America whose official language is Spanish.

We converted keywords “ Honduras”, “Independence day,” “paratroopers fail,” and “parachute” in Spanish with the help of Google translate and looked up the same on the search engine. The search threw up multiple reports from mid-September detailing the incident that took place during Honduras’ Independence Day celebrations at the José de la Paz Herrera Uclés National Stadium in Tegucigalpa last month.

One such report by CNN en Español, dated September 15, 2022, titled (translated from Spanish) ‘Parachutists fall on the public during the celebration of the Independence of Honduras.’

The report carried a 48-second-long-video showing the paratroopers landing at the stadium, including the failed ones, and stated, “A parachuting show for the Independence of Honduras did not have the best outcome because of the wind. Some of the Air Force paratroopers had spectacular landings on the public…”

Several news outlets reported on the parachuting display going wrong during the Honduras’ Independence Day Celebration in September. The same can be seen here, here and here.

In addition, we also found a tweet by Uganda Defence Spokesperson, dated October 13, 2022, clarifying, “all our paratroopers had successful jumps.” It stated, “Our attention has been drawn to a video doing rounds on social media purportedly to be a video of UPDF paratroopers that performed a tremendous job on Independence Day. Therefore, ignore this video because it is fake. A keen eye will see that the Parachutes are not the ones that were used at Kololo ceremonial grounds.” Adding, “Secondly, such a crowd did not attend the Independence Celebration in Kololo due to COVID 19 restrictions & all our paratroopers had successful jumps.”

We could thus conclude that the viral video showing the parachuting mishaps is from the Independence Day Celebrations in Honduras, and not Uganda.

Vasudha Beri
Vasudha noticed the growing problem of mis/disinformation online after studying New Media at ACJ in Chennai and became interested in separating facts from fiction. She is interested in learning how global issues affect individuals on a micro level. Before joining Newschecker’s English team, she was working with Latestly.
Facebook
Twitter
WhatsApp
Linkedin
Previous article
Here’s The Truth Behind The Viral Video That Claims To Show Japanese Train Travelling At ‘4,800 km/hr’
Next article
Kedarnath Helicopter Crash: No, This Image Does Not Show Uttarakhand Chopper Mishap