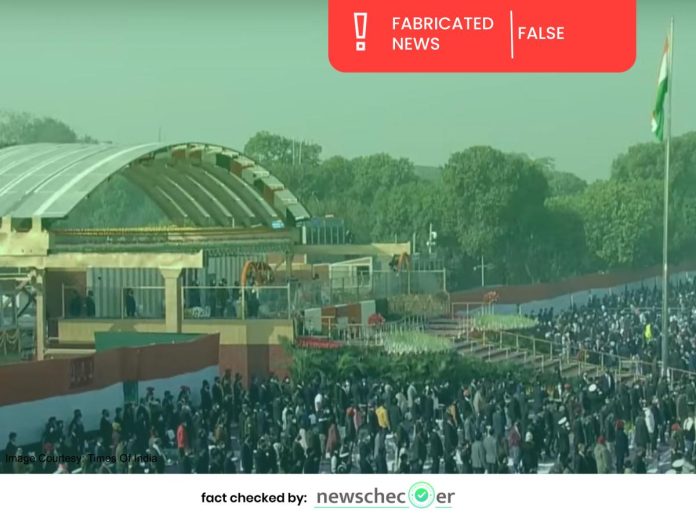 There is no dearth of patriotic messages during national holidays like Independence day and Republic  day.  Stories of valour and the symbolism behind the events that take place during the day are shared in various groups with good wishes on multiple platforms online.  One such message doing the rounds claims that there is a distinction between the flag ‘hoisting’ versus  ‘unfurling’. The message, that was heavily circulating in WhatsApp during Independence  day 2021, and has again resurfaced on the occasion of Republic day this past week, and claims that the flag is ‘hoisted’ by the Prime Minister during the Independence to symbolise the rise of a new nation, and that the flag is ‘unfurled’ at the Republic day, as the nation is already created and thriving.

The claim is viral on social media platforms such as WhatsApp and has also been picked up by mainstream news outlets and reported as ‘facts you didn’t know about’.

On a keyword search, Newschecker found several articles published ahead of the Independence Day function last year, by Yahoo News, India TV and by OpIndia on August 15 2021, which dwells on the intricacies of the differences between the ceremonies held in New Delhi on Independence day and Republic day.

“When the Tricolour is to be ‘hoisted’ on Independence Day, i.e. August 15, the flag is tied and sits at the bottom of the pole,” the article claims, and adds that the Prime Minister of the country raises the flag up and hoists it. The article further says that “On the other hand, when the Tricolour is to be ‘unfurled’ on Republic Day, i.e. January 26, the flag remains closed and tied up at the top of the pole. The President of India unfurls it.”

A video of the Independence Day event from 2004, published on the YouTube channel of Prasar Bharti Archives, clearly shows PM Manmohan Singh ceremonially holding the rope while the army personnel is seen tugging on the strings and unfurling it.

Furthermore, Newschecker looked at the Republic Day celebrations at the Rajpath, and saw videos of the flag ‘unfurling’ ceremony, and found that while the flag is ‘unfurled’ then too, the President stands on the saluting dais, offering his salute with the rest of the dignitories, while the flag is hoisted, then as well, by an army personnel, and not by the President of India.

To further check if the Ministry of Home Affairs makes any distinction in the terminology used, Newschecker referred to the  Flag Code issued by the Ministry and found no such distinction made. In one place, the Home Ministry clubs the two events together, and calls it ‘unfurling’, which corroborates what the video evidence of the functions tell us.

Update: Newschecker further reached out to Nampibou Marinmai, the Press Information Bureau PRO Defence Wing, who confirmed that there was no such distinction. “These are stories created by someone. The flag is unfurled on Independence day as well,” he said.

Claims that there is a distinction between the way tricolour is unfurled during the Republic Day and Independence Day are baseless and fabricated.

(Update: The article was updated on August 13, 2022 to include the telephonic conversation with Nampibou Marinmai)

Pankaj Menon
Pankaj Menon is a fact-checker based out of Delhi who enjoys ‘digital sleuthing’ and calling out misinformation. He has completed his MA in International Relations from Madras University and has worked with organisations like NDTV, Times Now and Deccan Chronicle online in the past.
Facebook
Twitter
WhatsApp
Linkedin
Previous article
Emotional Post Of ‘IAS Officer Working In Mica Mines’ Is Fabricated
Next article
No, There Are No Worms In Surgical Face Masks! Viral Claim Is FAKE