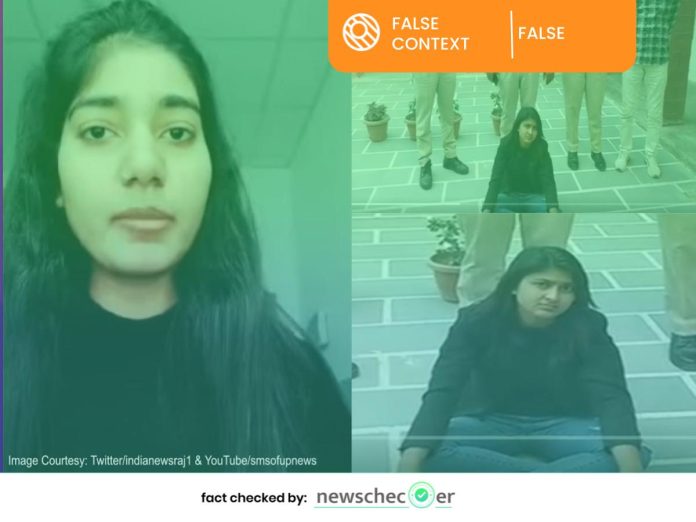 Since it began in last week of February, the war between Russia-Ukraine has become more fierce over the days. And amidst this ensuing war, students from across the globe pursuing higher education in Ukraine have found themselves caught in the cross-fire.

The Indian government has successfully evacuated 13,300 Indians by 63 flights who were stranded in Ukraine, as part of Operation Ganga by March 6, 2022 as per the Ministry of External Affairs.

Many Indian students have also issued video messages on social media urging the government to help them return home safely.

One such video by a student named Vaishali Yadav became quite viral on social media recently. However, her video message became the target of misinformation over the course of the last few days. In the video she could be seen requesting to be evacuated from Ukraine. The video can be found here.

Who is Vaishali Yadav?

Hailing from Uttar Pradesh’s Hardoi, Vaishali is the daughter of Samajwadi Party leader Mahendera Yadav. She is also the gram pradhan of Tera Pursauli village of district Hardoli and is reportedly pursuing MBBS from Ivano Frankivsk National Medical University in Ukraine.

Soon, social media users started reposting the video with claims saying that Vaishali Yadav is not actually present in Ukraine and is thus posting a fake cry for help. They supported their claim by saying that since she is the daughter of a Samajwadi Party leader and is thus making the fake claims at her fathers behest for political motivations – Newschecker found this claim to be false and analyses it in detail in this article.

Social media users also shared an image of a girl arrested by the police, who allegedly is Vaishali Yadav, and said that she has been arrested for sharing a fake appeal for help from Ukraine. This claim too is false.

Further, since Vaishali  is an elected representative at her village, questions were raised on how she could go to pursue a degree abroad while being an elected official. Allegations about misconduct started pouring in with speculations on who managed work on her behalf in the village while she was studying in Ukraine.

These allegations have led to a probe being initiated against her for being missing from her duties.

After the video appeal by Vaishali Yadav went viral on social media, users on Twitter and Facebook started posting claims that Vaishali Yadav, daughter of Hardoi’s SP leader Mahendra Yadav, made a fake video claiming that she is trapped in Ukraine amidst the Ukraine-Russia conflict.

The first claim was further built on by some social media users who posted an image of a girl arrested by the police.

These posts were accompanied with captions saying that the girl in the pictures is allegedly  Vaishali Yadav, who has been arrested for spreading false claims in her video that went viral appealing for help from Ukraine.

The social media users also claimed that the video was posted by her at the behest of her father to malign the efforts by the Indian government to evacuate Indian nationals from Ukraine.

Both these claims were found to be false by Newschecker during our investigation. Let’s take a look at the facts.

To ascertain the veracity of the claim regarding Vaishali Yadav’s appeal for rescue being fake, we conducted a google search. Through this we came across articles by the Indian Express and NDTV confirming her presence in Ukraine.

Apart from this, Newschecker also found the statement of Additional District Magistrate, Hardoi Vandana Trivedi on the YouTube channel named ‘SMS of UP News’.

Trivedi clarified that Vaishali Yadav reached Romania after leaving Ukraine and that she was in touch with the local administration’s control room. Yadav has also been sharing her live location at regular intervals with the disaster control room of the district.

Further, the same Youtube channel posted a video Hardoi Superintendent of Police Rajesh Dwivedi, where he confirms that Vaishali Yadav was indeed in Romania.

The said YouTube channel has published another video of Vaishali Yadav, in which she has clarified about her location.

Speaking with Newschecker Vaishali’s father, SP leader Mahendra Yadavconfirmed that her daughter was indeed in Ukraine when the video was shared by her. He said that she reached Romania and stayed there for three days before reaching Delhi on the evening of March 3, 2022 by a special flight as part of the Operation Ganga by the Government of India. She was then dropped by a government car from Delhi to Lucknow.

Newschecker spoke with Vaishali Yadav on March 7, 2022 on call. She informed us that she was stuck in Ukraine the past few days and had shared the video in question from there itself. Vaishali refuted the claims on social media about her being in Hardoi when she shared the video appeal for help.

She further added that she had shared her live location with the local authorities in Hardoi and that she had also spoken on video call with them when she reached Romania. Vaishali confirmed to Newschecker that she has now reached India.

But was Vaishali arrested? In order to ascertain the truth behind the second claim we searched the viral image being shared with the claim via Google’s reverse image search.

Through the reverse image search we came across an article by OneIndia Hindi  dated March 3, 2022 on the same image which stated that the girl in the image is Kamla Chaudhary who was recently arrested by Nagaur—which is a district in the state of Rajasthan—police for uploading an objectionable video on Instagram.

Using this information as a clue, we further conducted searches using the keywords “Kamla Chaudhary” and “arrest” and came across articles by The Print and NDTV on the matter.

Media reportage by multiple news organisations confirm that Kamla Chaudhary was indeed arrested in Rajisthan’s Nagaur after she allegedly dared the police to arrest her for the consumption of an illegal substance (ecstasy).

Nagaur police had also tweeted on March 3, 2022 confirming the arrest of the girl and the details about the case.

Placing the images adjacent to each other we could establish that the girl in the image posted by social media users as well as Nagaur police was indeed not Vaishali Yadav.

The claims doing rounds on social media about Vaishali Yadav not being present in Ukraine and posting a fake appeal for rescue are false. This has been confirmed via various proofs including her father’s statement to Newschecker.

The second claim about Vaishali Yadav’s alleged arrest for posting the fake appeal for rescue from Ukraine is also false. The girl who can be seen arrested in the viral image is one Kamala Chaudhary.  Images of a different person’s arrest were shared in false context claiming the arrest of Vaishali Yadav

Preeksha Malhotra
Preeksha is a journalism graduate interested in exploring and working on the phenomenon of fake news globally. She desires to work on compelling stories that employ digital journalism to bring forth narratives that matter. She is also a budding researcher, studying the COVID-19 infodemic as a research fellow with the Institute of Economic Growth.
Facebook
Twitter
WhatsApp
Linkedin
Previous articleMisleading Video Claims Pro Modi Slogans Chanted In Pakistan’s Parliament Linking It To Evacuations From Ukraine
Next articleOld Photo Claiming to show aftermath of Peshawar Mosque Blast