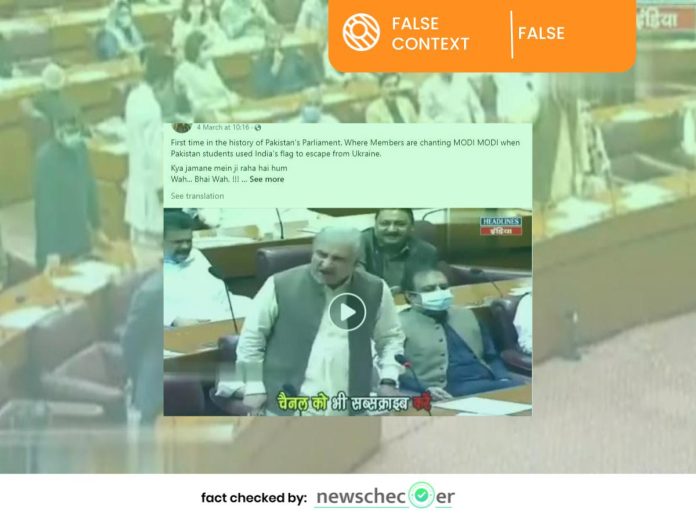 Evacuations of their citizens stuck in Ukraine amid Russia’s invasion are being conducted by many countries. Approximately 16,000 Indians, most students, have been evacuated as part of Operation Ganga being undertaken by the Indian government and the internet has been rife with visuals of evacuees holding the Indian flag.  Reportedly many Pakistani and Turkish students also stuck in Ukraine used Indian flags to gain safe passage and escape the wartorn country. In this backdrop, a video is going viral on social media claiming that pro Modi slogans were chanted in Pakistan’s parliament after “Pakistan students used India’s flag to escape from Ukraine.” Newschecker has found the claim to be false.

25 seconds into the video, we found visuals matching our keyframes taken from the clip going viral which claims that elected members of Pakistan’s parliament chanted “Modi Modi” at a recent session.

We reduced the playback speed of the video to carefully listen to what the members were chanting amid Shah Mehmood Qureshi’s speech. We concluded that the members in Pakistan’s parliament were chanting “Voting, Voting” and not “Modi Modi.” While Qureshi did mention Prime Minister Narendra Modi in his speech, no such slogans as being alleged were raised by the parliamentarians.

Further investigation  led us to a report by newspaper Dawn, dated October 26, 2020, titled ‘NA unanimously adopts resolution against blasphemous sketches after noisy session’, carrying a still from the viral video. According to the report, Foreign Minister Qureshi “read out another resolution that the government wanted to be passed with consensus on the issue of blasphemy. With opposition members chanting “voting! voting!” for the resolution presented by Asif, a furious Qureshi accused the opposition of “doing politics” on the sensitive matter.”

This is not the first time the original video was used out of context to make a false claim. Newschecker debunked the same video claiming to show that ‘Modi Modi’ was chanted by Pakistan’s parliamentarians in 2020.

If u liked this and want to read more such fact checks then click here.

Vasudha Beri
Vasudha noticed the growing problem of mis/disinformation online after studying New Media at ACJ in Chennai and became interested in separating facts from fiction. She is interested in learning how global issues affect individuals on a micro level. Before joining Newschecker’s English team, she was working with Latestly.
Facebook
Twitter
WhatsApp
Linkedin
Previous article
Weekly Wrap: Misinformation Around #RussiaUkraineConflict, False Claims About Rahul Gandhi & More
Next article
Appeal For Help By Vaishali Yadav, Gram Pradhan From Hardoi Stuck In Ukraine Becomes A Prey For Misinformation