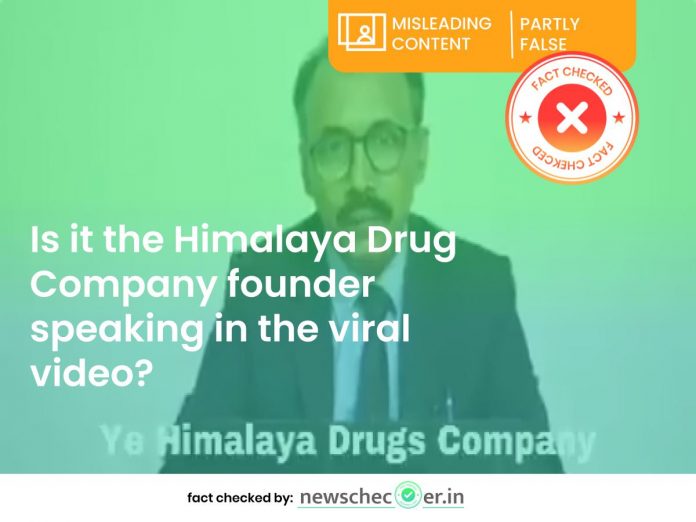 A video of a man speaking in Urdu and encouraging the Muslim community to increase their representation in professions such as administrative services, health department, judiciary, and others has been shared by many social media users recently.

Users have claimed the man in the video to be the owner of the Himalayan Drug Company, Mohammed Manal. These claims also advise people against the use of Himalaya products.

One such example of the claim reads, “We are all proud of Indian ‘Himalayan Drug Company’ but see the mentality of it’s owner Mohammed Manal and think twice before using the products.”

You can read similar claims with the 44-second video below.

Using keyframes from the video, we did a reverse search on Yandex.com. This led us to a Youtube video in which the same man was seen speaking on CAA and NRC. A Google search of keywords from this video led us to Naqi Ahmed Nadwi’s Facebook page—the man speaking in the video.

On 22 August, Nadwi posted a video on his Facebook page with an Urdu caption:

It translates to, “The demolition of Babri Masjid and the establishment of Ram Mandir in its place is a twist in the history of India which Muslims must consider seriously!”

The video clip included in the initial claim was taken from this 12-minute video by Nadwi. You can watch the clip from the 11:54 timestamp.

As per Nadwi’s LinkedIn profile, he is an Administrator at Maaden CEO Office in Riyadh, Saudi Arabia.

An image of Himalaya Drug Company’s founder, M Manal posted on the company’s website clearly shows he is not the same man as claimed in the initial tweets. Also, M Manal passed away in 1986. The current CEO of the company is Philipe Haydon.

On 27 September, the company tweeted a clarification on the claim calling it baseless rumours.

Tweets claiming the video of a man urging the Muslim community to increase their representation in sectors such as police force, to be the founder of Himalaya Drug Company are misleading. The man in the video is Naqi Ahmed Nadwi, Administrator at Maaden CEO Office in Riyadh, Saudi Arabia.

Prathmesh Kunt contributed towards research for this fact check.

If you would like us to fact check a claim, give feedback or lodge a complaint, WhatsApp us at 9999499044 or email us at check[email protected]. You can also visit the Contact Us page and fill the form.