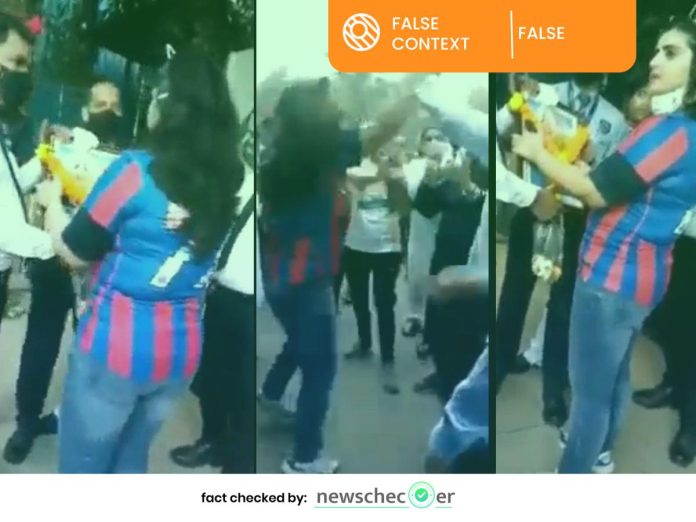 A video, showing a young woman snatching Bharat Mata photo from what appears do be a Republic Day celebration, and slapping and abusing those who attempt to wrest it from her hand, is being widely shared on social media. The video  claims to show a ‘muslim woman’ desecrating the picture of Bharat mata on the Republic Day in Mumbai. A fact check by Newchecker has revealed that the woman seen in the video is not a Muslim and that the video has been falsely given a communal twist.

Several social media users shared the video of woman snatching Bharat Mata photo with the same claim, with many putting up disclaimers that they had received the video on WhatsApp.

Newschecker also received the same video, of a woman snatching Bharat Mata photo, on our WhatsApp tipline requesting it to be fact checked.

In order to verify the authenticity of the claim, Newschecker began by conducting a keyword search for ‘woman has meltdown’ and ‘Bharat mata photo’. The Google search results threw up a tweet by the handle @DeepikaBhardwaj, who tweeted the same video, but without the communal angle. The video has over 2000 likes and over 2000 retweets.

In the same thread, @DeepikaBhardwaj further tags a tweet which is allegedly tweeted by the same woman snatching Bharat Mata photo.

The tweets have been deleted by the author and the twitter account with that username doesn’t seem to exist anymore. But using the webarchive tool, Newschecker was able to find the original tweet thread, where the woman snatching Bharat Mata photo explains the reason behind her action. The now deleted thread indicates the handle belongs to  Kanika Bhupinder Sekhri- which proves that she is not a Muslim.

She wrote “They were gathered just to hoist the flag & there was a goddess mata rani photo in their dirty hands, and that too of a man, that leader of Lodha. I tried to snatch the frame from his dirty hands because the rape percentage in our country is so high and these men are the reason behind exploiting even a 1 or 2 year old baby or an adolescent… Still these men are freely allowed to hold devi’s photo, murti or visit vaishnodevi and devi temples….how is this possible? A man abusing, beating, attacking with acid, raping, molesting, exploiting, looting, a woman who is one of the form of goddesss Durga and still are free to worship devi.”

In her tweets, the woman further reveals that she went to the commissioner to lodge a complaint against them.

In the tweet, the woman snatching Bharat Mata photo further mentions that the location of the incident is Thane. On conducting a keyword search, Newschecker found an article on Times Now which said that the incident occured in the Kapurbawadi station premises. Newschecker reached out to the Kapurbawadi police who confirmed to us that the woman was not a Muslim. “She is mentally ill, and couldn’t bear the noise of the loudspeaker. She came down and started asking what was happening when they responded that it was the  Republic Day celebrations. They got into a spat and that was recorded in the video, which is now going viral with communal claims that are not true,” said UD Sonawane, the Sr police inspector, Kapurbawadi station.

A video of a mentally ill woman snatching Bharat Mata photo from the hands of a man amidst Republic Day celebration is falsely shared with communal angle, identifying the woman to be a Muslim.

Pankaj Menon
Pankaj Menon is a fact-checker based out of Delhi who enjoys ‘digital sleuthing’ and calling out misinformation. He has completed his MA in International Relations from Madras University and has worked with organisations like NDTV, Times Now and Deccan Chronicle online in the past.
Facebook
Twitter
WhatsApp
Linkedin
Previous articleDid Govt Slash Corporate Tax From 18% to 15% In Union Budget 2022?
Next articleViral Post Claiming ‘Islamic Prayers’ At ‘Karnataka Youth Congress Office’ Is Misleading