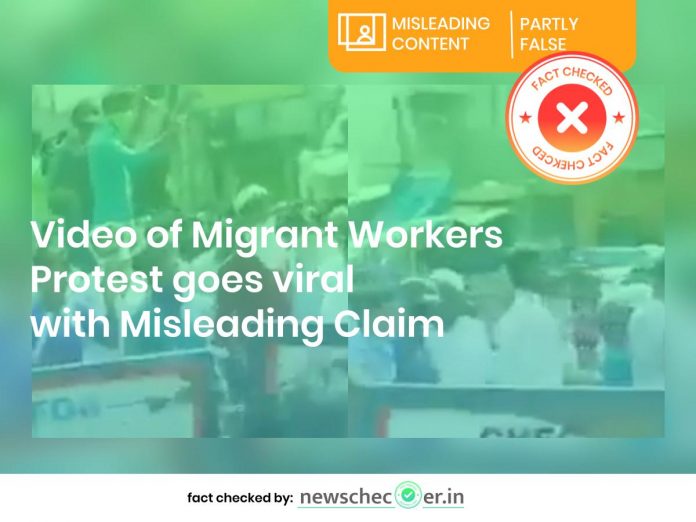 A Twitter user shared a video that shows people protesting on roads demanding to be sent back home. The user claimed that this video is from Ahmedabad, Gujarat.

A video that shows migrant workers protesting on the roads demanding that they be sent back home is doing rounds across various social media platforms. It is being claimed that this video is from Ahmedabad, Gujarat. In the viral video, people can be seen protesting, whereas police officials can be seen recording the protest on their phones.An archive version can be seen here.

The caption of the viral video, when translated to English reads, Migrant workers in Ahmedabad, Gujarat, came out on the road demanding ration. Chant slogan against Modi’s government.

We found several media reports about the protest of migrant workers in Surat, Gujarat. According to a report by India Today, more than 500 workers employed in industries in the Hazira belt, on the outskirts of Surat, gathered to demand that the authorities make arrangements for them to return to their home states.

We discovered that the video was being massively shared on Facebook and WhatsApp with an identical claim. One of our readers also sent the viral video to Newschecker’s helpline number for verification.

As we began fact-checking the claim, we observed the video and spotted a board of ‘Sana Ghar Sansar.’ With the help of Google maps, we searched for the location and found that it is situated at Tolichowki Road in Hyderabad, Telangana.

Taking a clue, we ran a Google search and searched for any media reports. During our search, we found a report published by the media outlet Asianet News. The report published on May 4, 2020, carried out the same video viral on social media. According to the report, Over 1,000 migrant laborers assembled at Tolichowki area in Hyderabad to reach the railway station following rumors that the government would operate special trains for them and demanded they be sent back home.

Google search led us to another report published by ‘New Indian Express,’ which carried out the same visuals doing rounds on social media. The headline of the report reads; Migrants protest at Tolichowki, wants the government to send them home.

With the help of relevant keywords search on YouTube, we found the same video on the official YouTube channel of Sakshi TV, uploaded on May 3, 2020. In the bulletin aired by Sakshi TV, one can spot the police officials, shops, and people protesting as in the viral video.

During our search, we found a longer version of the viral video. In the video, we spotted a policeman wearing a jacket of Hyderabad City Police, which confirms that the video was shot at Tolichowk in Hyderabad.

It is evident from our fact check that the video doing rounds on the social media in which migrant workers can be seen protesting against the government is from Hyderabad, Telangana, and not from Ahmedabad, Gujarat.

Shaminder Singh
Shaminder started off his career as a freelance journalist for a consulting and research firm. He has been a Political Strategist and Media Manager. Before joining Newschecker, he worked with various reputed media agencies like Daily Post India, PTC News.
Facebook
Twitter
WhatsApp
Linkedin
Previous article
2018 video of British PM Boris Johnson Offering Tea to Reporters Shared on Social Media as a Recent One
Next article
Video Of Pakistan Airline Goes Viral As Air India Flouting Social Distancing Norms