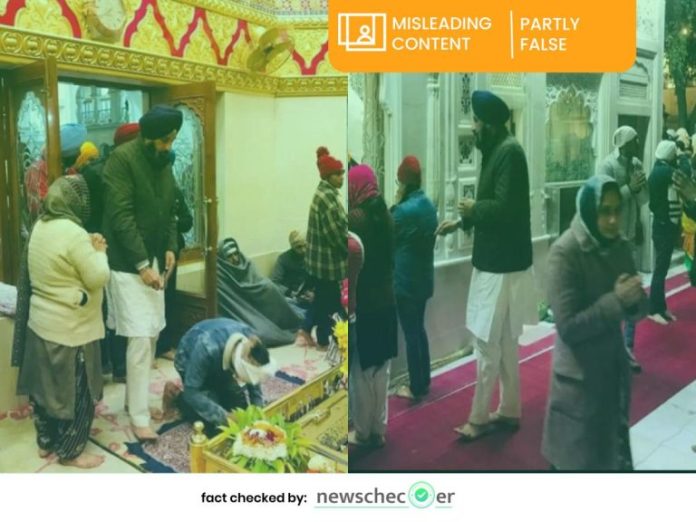 Political slugfest has erupted in Punjab between the AAP and the ruling Congress party after several social media users and news channels shared images showing SAD MLA Bikramjit Singh Majithia in Golden Temple. The viral image was shared by social media users claiming that it was from January 1, 2022. But a fact check by Newschecker has revealed that the image is actually from January 2021 and was wrongly reported as January 2022.

The images showing Majithia in Golden Temple come as Punjab Police is on the hunt for the SAD leader, who is currently booked under the Narcotic Drug and Psychotropic Substance (NDPS) Act. Majithia is the brother of former Union Minister and SAD leader Harsimrat Kaur Badal. His anticipatory bail plea was recently rejected by the Mohali HC after which he moved the  Punjab HC for the same. After images of Majithia in the  Golden Temple went viral, AAP alleged that Majithia was roaming openly under the Congress government as there was a ‘setting’ between the Channi govt and the Badals.

The image of Majithia at Golden Temple was shared by several users on social media.

On probing further, we found several other social media posts made in January 2021 on the same subject here and here.

We also found that one of the viral images of Majithia in Golden Temple was uploaded on Bikramjit Singh Majithia’s Instagram handle on January 1, 2021. However, we found that this picture was later deleted.

The viral images showing Akali leader Bikramjit Singh Majithia in Golden Temple are from January 2021 and not recent, as is being claimed. The claims are misleading.

(This fact check was originally published in Punjabi)

Pankaj Menon
Pankaj Menon is a fact-checker based out of Delhi who enjoys ‘digital sleuthing’ and calling out misinformation. He has completed his MA in International Relations from Madras University and has worked with organisations like NDTV, Times Now and Deccan Chronicle online in the past.
Facebook
Twitter
WhatsApp
Linkedin
Previous article
Viral Post Claiming ‘America’s Richest Man John Ford Converted To Islam’ Is Misleading
Next article
Viral Video Claiming To Show Aryan Khan Urinating Openly At Airport Is Misleading