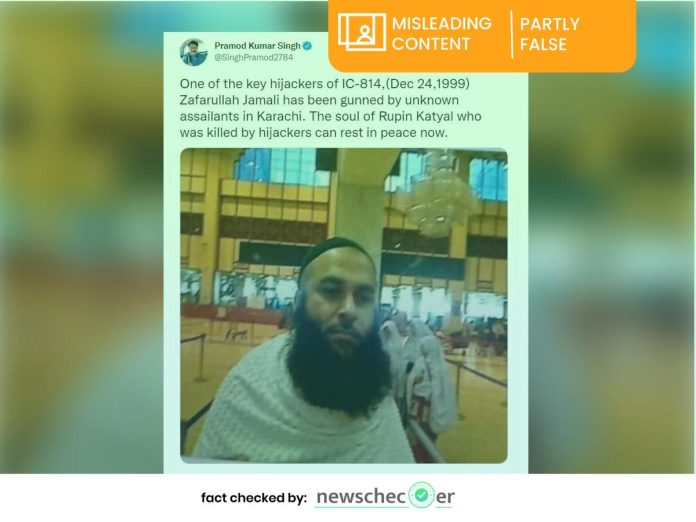 Twitter handle @OSINTUpdates shared the update on its twitter page in the evening hours of Wednesday, March 16. The tweet carried an image of a person, whom it identified as one Zafarullah Jamali, with the claim “Zafarullah Jamali, the main character who hijacked the Indian plane on December 24, 1999, was killed by unknown assailants in Karachi.” The tweet has received over 2,000 shares and around 9,000 likes. Many users also shared the screenshot of the tweet to claim a second death, while others just posted it afresh.

What Happened In The IC 814 Hijacking?

Shortly after taking off from the Tribhuvan International Aiport in Kathmandu on December 24, 1999, Indian Airlines flight IC 814, carrying 180 passengers, was hijacked by five terrorists enroute to Indira Gandhi International Airport in Delhi. The hijacking was done to facilitated the release of terrorists in Indian custody.

The flight was taken to Dubai after a brief stop for refuelling at the Amritsar airport. During the episode, a 25-year-old Indian, Rupin Katyal was killed by the terrorists to put pressure on the Indian government to agree to their terms. Katyal and his wife were returning from their honeymoon in Kathmandu.

In Dubai 27 people were released and Katyal’s body was offloaded, before the flight was taken to Kandahar, where the Taliban joined negotiations for the release of passengers. The episode ended with India agreeing to release of three terrorists- Masood Azhar, Omar Saeed Sheikh and Mushtaq Ahmed Zargar, all affiliated with terror group Harkat-ul-Mujahideen at the time. Present-day NSA Ajit Doval, then the Intelligence Bureau chief, oversaw the handover and release of passengers. The hostage crisis lasted for 7 days.

To verify if a second terrorist involve in IC 814 hijack was killed in recent days, Newschecker began by conducting a keyword search of the name ‘Zafarullah Jamali’ and ‘IC 814 hijack’ and ‘killed’. The search results threw up several articles, but they were all related to the recent death of Mistry Zahoor Ibrahim.

We researched further and found a tweet by journalist Pramod Kumar Singh whose tweet thread seems to have triggered the confusion. In his first tweet,  which carries the same image as tweeted by @OSINTupdates, Singh writes that “One of the key hijackers of IC 814, (Dec 24,1999)  Zafarullah Jamali has been gunned by unknown assailants in Karachi. The soul of Rupin Katyal who was killed by hijackers can rest in peace now.” Later, he later corrected his error by tweeting in the same tweet thread “Zahoor Mistry alias Jamali is the correct name..he was killed sometime back & it was confirmed on March 7th.”

As users begin to point out that the killing happened on March 7 and was not a new development, Pramod Kumar Singh responds by saying “I tweeted after I got his pic.”

We then decided to find the names of terrorists who were involved in the hijacking, and found a book by Anil K Jaggia, who was the flight engineer of the flight, titled ‘IC 814 Hijacked’, that he co-authored with Saurabh Shukla. His author info reads as follows “Anil K. Jaggia, operated hijacked flight IC 814 as its Flight Engineer. He was chief of Flight Engineering with Indian Airlines and had 20,000 flight hours’ experience as Flight Engineer.”

Regarding the identity of the five men who hijacked the aircraft, Jagia’s book reads “The identity of the  five masked hijackers who identified themselves as Chief (Red Cap), Burger, Shankar, Bhola and Doctor have been identified by the Home Minister, L.K Advani as follows. Chief (Red cap): Ibrahim Athar hails from Bahwalpur. He is the brother of Maulana Masood Azhar, one of the militants released in exchange for the hostages. Doctor: Shahid Akhtar Sayed from Karachi’s Gulshan Iqbal locality. Burger: Sunny Ahmed Qazi of Defence Colony, Karachi. Bhola: Mistry Zahoor Ibrahim of Akhtar Colony, Karachi. Shankar: Shakir of Sukkur City.”

Going by the above list, none of the five men in the list are named Zafarullah Jamali. On researching further, we also found an article by Hindustan Times published on the 7th of March.

The article also confirms that only two of the five terrorists were now alive and that the other three were dead. “According to counter-terrorism experts, only Ibrahim Azhar and Shahid Akhtar Sayed are alive in Pakistan with the latter moving away from Karachi to the relative safety of the lawless Khyber Paktunkhwa area of Pakistan. It is understood that while one of the hijackers died due to natural causes, another was killed by Indian security forces during the December 13, 2001, attack on Parliament by the same Sunni jihadist group with Deobandi ideology,” reads the article.

We also found a tweet by journalist Aditya Raj Kaul who clarified that Mistry Zahoor Ibrahim and Zafarullah Jamali are the same person.

With regards to the image of the man attached with the tweet, Newschecker could not trace the source of the image, and this article will be updated once we get more information.

A tweet by journalist Pramod Kumar Singh, misidentifying Mistry Zahoor Ibrahim aka Jamali as Zafarullah Jamali was picked up by social media users and shared as the death of a second terrorist associated with the IC 814 hijack.

Pankaj Menon
Pankaj Menon is a fact-checker based out of Delhi who enjoys ‘digital sleuthing’ and calling out misinformation. He has completed his MA in International Relations from Madras University and has worked with organisations like NDTV, Times Now and Deccan Chronicle online in the past.
Facebook
Twitter
WhatsApp
Linkedin
Previous article
Viral Video Of Yogi Adityanath Crying At The Screening Of The Kashmir Files Is An Old Video From 2017 Shared As New
Next article
No, Barkha Dutt Didn’t Justify The Exodus Of Kashmiri Pandits, Viral Video Is Misleading