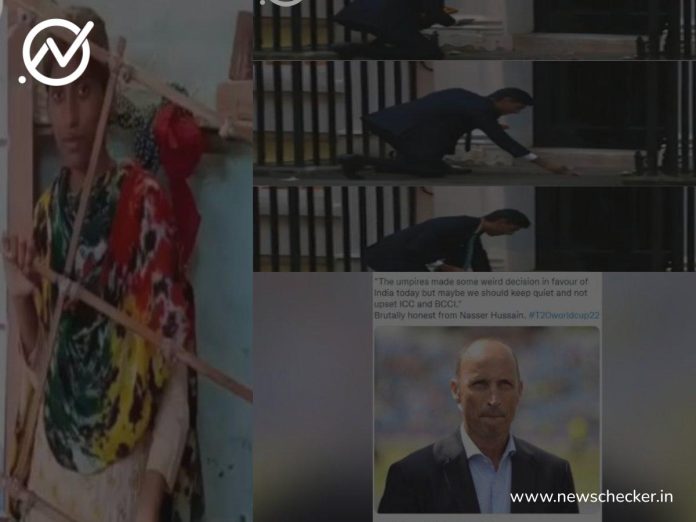 From false claim of a sketch artist from UP, Noorjahan, entering the Guinness Book of World Records to newly elected UK PM Rishi Sunak performing religious rituals before entering 10 Downing Street as PM, here are the 5 fact checks that Newschecker debunked this past week:

A video of a sketch artist named Noorjahan drawing 15 portraits of India’s national heroes and freedom fighters at the same time is going viral on social media along with the claim that the artist has entered the Guinness Book of World Records for achieving this feat. The video shows the artist using an apparatus made out of wood columns attached to sketch pens which allows her to draw multiple portraits at the same time. Newschecker found these claims to be untrue. Read more here.

Earlier this week Rishi Sunak became the third person to take over the Prime Minister’s office in the United Kingdom within one year. Sunak also became the first Indian-origin person to lead the country. In this backdrop, a video showing the newly appointed ‘Hindu’ Prime Minister of the UK placing diyas (earthen lamps) outside an entrance door is going viral on social media platforms. Those who shared the clip claimed that it showed Sunak performing “religious rituals” before entering 10 Downing Street – British PM’s office and official residence. Newschecker found the claim to be untrue. Read more here.

Following India’s thrilling last-ball victory over Pakistan in a group-stage clash at the ICC Men’s T20 World Cup in Melbourne on Sunday, a quote attributed to former England captain Nasser Hussain is doing the rounds on social media. “The umpires made some weird decision in favour of India today but maybe we should keep quiet and not upset ICC and BCCI,” the viral tweets and FB posts claim Hussain as saying post the nail-biting final over of the game that involved a few crucial umpiring decisions. Read more here.

Rishi Sunak At Beach Party? No, Viral Video Features UK PM’s Doppelganger
A video claiming to show newly elected UK Prime Minister Rishi Sunak dancing at a rave party has been doing the rounds on social media claiming to show his colourful past. The video shows a shirtless gentleman dancing to the tunes of electronic music with a drink in his hand gesturing to the camera while dancing. Newschecker found these claims to be untrue. Read more here.

An advertisement for a ginger oil product, claiming drastic weight loss and decreasing tummy fat if applied on one’s  stomach, is going viral on social media platforms. The viral advertisement has been resurfacing under various product names  on Facebook. Newschecker has found the claim to be false. Read more here.

Vaibhav Bhujang
Vaibhav is a part of Newschecker’s English team, where he spots and debunks all kinds of misinformation, making the rounds on the internet. A Journalism graduate from St. Xavier's College, Mumbai, he holds an M.A degree in Philosophy and an M.Phil from Delhi University.
Facebook
Twitter
WhatsApp
Linkedin
Previous article
Video Of Firecrackers In The Night Sky Is Not From Diwali Celebrations In Delhi
Next article
Neither Agartala, Nor Barabanki, Viral Video Of Explosion Is From Guwahati