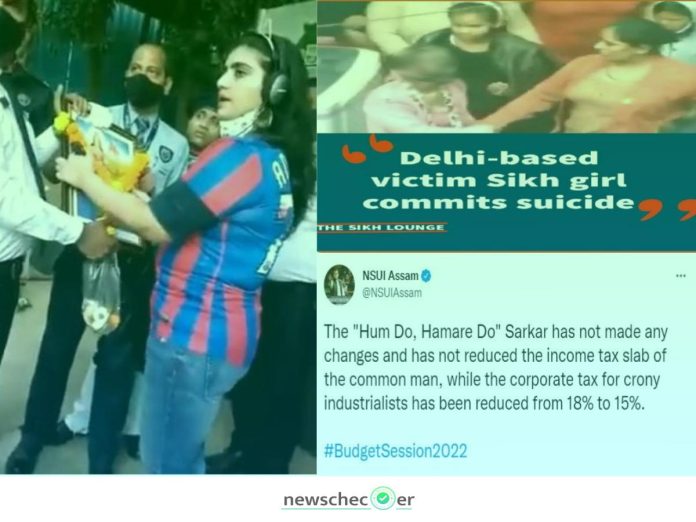 From false claims regarding suicide of Shahdara assault survivor to a communal spin on a video of a mentally ill woman snatching Bharat Mata’s photo, social media was abuzz with false claims and deliberate misinformation this week as well. While some social media users mixed up tax relief for ‘cooperatives’ with ‘corporate’, several users shared a video of Pakistan customs officials destroying confiscated mobiles, claiming to show the Taliban ‘ban’ on mobile phones in Afghanistan. This and more, here are the top 5 fact checks by Newschecker this week.

A video, showing a young woman snatching Bharat Mata photo from what appears to be a Republic Day celebration, and slapping and abusing those who attempt to wrest it from her hand, is being widely shared on social media. The video  claims to show a ‘muslim woman’ desecrating the picture of Bharat mata on the Republic Day in Mumbai. A fact check by Newschecker has revealed that the woman seen in the video is not a Muslim and that the video has been falsely given a communal twist. Read more here.

Four days after the Shahdara assault case, where a 20-year-old girl was allegedly kidnapped, thrashed and sexually assaulted by 11 members of a family including minors, in New Delhi’s Shahdara area, social media was rife with rumours that the young woman had ended her life. Newschecker confirmed with the Delhi police that the claim was false and that the victim is safe. Read more here.

FM Nirmala Sitharaman tabled the Union Budget for financial year 2022-23 in the parliament on Tuesday. Soon after, several social media users claimed that the government has reduced the corporate tax for “crony industrialists” from 18 percent to 15 percent in the union budget. However, Newschecker has found out that the viral claim is misleading. Read more here.

A video has been doing the rounds on social media claiming to show the Taliban destroying smartphones in Afghanistan after they banned the use of mobile phones and music in the country. Our investigation proves that the video being shared is not from Afghanistan but from an earlier incident in Pakistan. Read more here.

Social media users shared an image of a group of men seemingly offering an Islamic prayer, claiming to show the inauguration of the Karnataka Youth Congress office. The viral image also has portraits of Congress leaders Sonia Gandhi, Rahul Gandhi and Priyanka Gandhi on the background wall. The ‘communal’ claim about inauguration of Youth Congress office in Karnataka is misleading. Read more here.