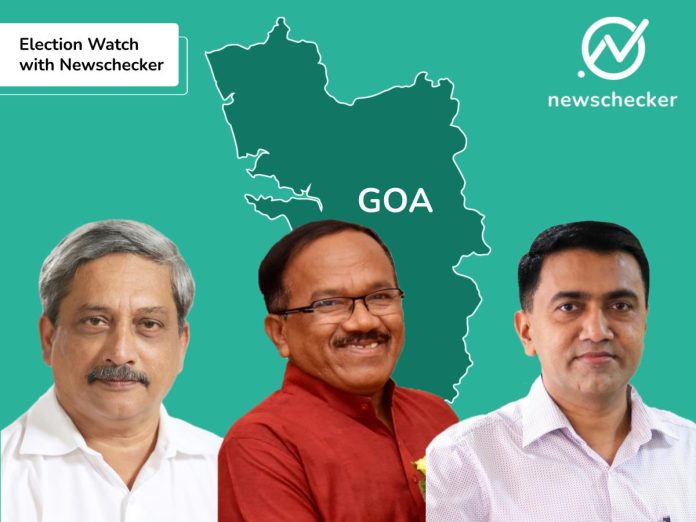 Goa is all set to vote for its 40-member legislative assembly on Monday, in an election that is seen as a three-cornered fight between the BJP, Congress and the  AAP, while Mamata Banerjees’s TMC hopes to expand its horizon beyond West Bengal. In the past ten years, the state has seen three chief ministers, Manohar Parrikar (serving two terms), Laxmikant Parsekar and Pramod Sawant. The ruling BJP, hoping for third term has promised free LPG cylinders and no increase in state duties on fuel, not to be outdone by the AAP, which is promising free electricity, water in addition to unemployment benefit of Rs3000,  while the Congress banks on anti-incumbency and the ‘nyay scheme’ that promises Rs 6000 for the poor.

But amidst the persuasions and promises, where exactly does the state stand in terms of key indicators? Newschecker analyses where the 10 years of the BJP rule has left Goa.

DESPITE PANDEMIC, GOA SEES A RISE IN GSDP & PER CAPITA GSDP

But on the whole, BJP’s ten year term in Goa has seen the state GDP climb, albeit a drop at two instances.

An analysis of employment data of Goa compiled by the CMIE from January-April 2016 indicates an interesting trend. While the number of unemployed people in Goa have been brought down over the years, the Unemployment Rate (UER) and the Labour  Participation Rate has worsened.

Goa had 2.04 lakh unemployed in January-April 2016 according to the  CMIE data. This number has been brought down considerably to 67,000 in September-December 2021.

But the unemployment rate (UER) shows a different trend.

From January-April 2019 through the pandemic, Goa’s UER graph shows ups and downs, till the state records the highest ever UER ever during January-April 2021 at 19.43%. This is more than three times than the national average (6.83%) in the corresponding time.

The labour participation rate (LPR) is no better.

Labour force participation rate is defined as the section of the working population in the age group of 16-64 in the economy currently employed or seeking employment. When there are fewer jobs, people are discouraged to focus on employment which eventually leads to lower participation rate.

In the latest data made available by the CMIE for the September-December 2021 quarter, the LPR of Goa is at an all time low of 36.79%, and is lower than the national average of 40.38%.

Crime in Goa has seen several peaks and plunges. Goa has had a low crime rate in comparison with larger states like UP. According to the NCRB, the total number of cognizable crimes under IPC increased from 3,608 in 2012 to 4,466 in 2014. The figure then continues to go up and down before rising once again to 3,393 cases in 2020.

Serious crimes such as murder showed slight decrease over the years, but with no drastic changes. While 45 murder cases recorded in 2012, 34 such cases were recorded in the state in 2020.

Domestic abuse also rose in the  period between 2012(24) and 2013(40), before declining to 8 cases in 2020. The state, meanwhile, has hardly  seen dowry deaths, with a total of 4 such recorded instances in years according to NCRB data.

When it comes to law enforcement infrastructure, Goa has a higher police per population ratio (PPR- the number of police personnel per 1 lakh of the population) in comparison with some of the more populous states. But on reading the sanctioned and actual figures together, we observe that it falls short.

Goa’s expenditure on health has not seen a steady trend. It drops in the first 4 years of the government before it sees several spikes and falls.

In terms of health infrastructure, National Health Profile data shows the number of PHCs (Primary Health Centre) grew from 19 in 2012 to 59 by 2021. The number of hospital beds also increased, although marginally, from 2,510 to 3,086. Figures on the shortfall of specialists at government hospitals remain in the same range, with a shortfall of 12 doctors in 2015 to 10 in 2020.

Looking at the health indicators, anaemia among women worsened in the state, with the NFHS reporting a rise from 31.3% in 2015-16 to 39% in 2019-21. This coincides with the national trend of increasing cases of anaemia among women, but is still lesser than the India average in both years.

But infant mortality rate (IMR) and severe wastage in children showed a declining trend. While Goa’s IMR was 12.9% in 2015-16, it fell to 5.6% in 2019-21. This is much less than the national average and coincides with the national trend of decreasing IMR.

Pankaj Menon
Pankaj Menon is a fact-checker based out of Delhi who enjoys ‘digital sleuthing’ and calling out misinformation. He has completed his MA in International Relations from Madras University and has worked with organisations like NDTV, Times Now and Deccan Chronicle online in the past.
Facebook
Twitter
WhatsApp
Linkedin
Previous articleWeekly Wrap: From Old Video Of Yogi Distributing Cash, Fake Posts Around Hijab Row & More
Next articleUttarakhand: 5 Years, 3 Chief Ministers, But What About Governance?