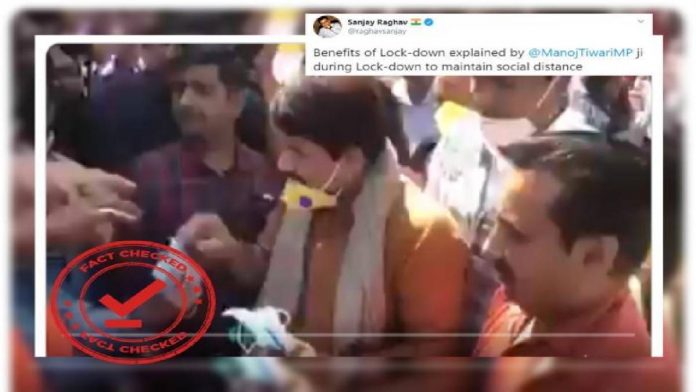 Hindi Content Lead of Aam Aadmi Party’s social media team Sanjay Raghav took a jibe on Delhi BJP chief and MP Manoj Tiwari by sharing a video in which Tiwari can be seen distributing masks and sanitizers. Sanjay claimed that the BJP Chief is creating awareness about lockdown by violating it himself.

An archived version of his tweet can be viewed here.

As per recent updates made by the Indian Health Ministry on April 4, 18:00 PM, there are a total 2784 active coronavirus cases in India. The country is seeing a spike in numbers in the aftermath of the religious congregation at Nizamuddin Markaz, which has resulted in the quarantine of as many as 9,000 people. Amid the worsening situation in India, one thing that hasn’t changed is the political accusations. For instance, the political turmoil in the national capital is as seasoned as it could be, the opposition is accusing the CM of not dealing with the COVID-19 properly and the CM, as usual, accusing the Centre of not allocating adequate funds to fight the pandemic. Adding to the ongoing turmoil, Aam Aadmi Party member Sanjay Raghav accused the state BJP chief Manoj Tiwari of violating the lockdown and not practicing the social distancing.

As we began fact-checking the claim made by AAP member Sanjay Raghav, we fragmented the video in order to know the date and the location of the video, but we didn’t find any authentic information to corroborate. We then searched YouTube with the keyword “Manoj Tiwari distributes masks,” and we found a video uploaded by the official channel of The Tribune, which matches the description of that of the claim.

The Tribune video was uploaded on March 17, 2020, hence we found that the video was published at least five days before the lockdown was first ordered by the Delhi CM Arvind Kejriwal.

Using the Twitter advanced search feature, we further checked if the same video was shared by social media users or BJP’s Delhi unit. We found that a tweet made by the Twitter handle managed by Manoj Tiwari’s office shared the same video on March 17.

We also found a tweet made by the official Twitter handle of the BJP’s Delhi unit, which contains pictures of the same event, as shown in the claim.

Now, we tried to collect more information on when the lockdown was announced and even before lockdown what were the restrictions on gathering as announced by the Delhi government. During our search, we found an order dated 22.03.2020, which notifies of the lockdown in the national capital from March 23, 2020, to March 31, 2020. The same can be found here. We also found two notices released by the Delhi Government, first notice dated March 13 prohibits gatherings beyond 200 people; second notice dated March 16 prohibits the gathering beyond 50 people. However, the two notices consequently released on March 13 and March 16 do not carry any mention of the lockdown.

We also found a tweet by Neelkant Bakshi, who is the Head Media Relations & Co-Incharge Media, Social Media & IT of the BJP’s Delhi unit in which he has called out Sanjay Raghav for spreading fake news.

Hence it is imperative from the findings mentioned above that the claim made by AAP member Sanjay Raghav is misleading and Delhi BJP chief Manoj Tiwari did not violate the lockdown ordered by the Delhi Government.