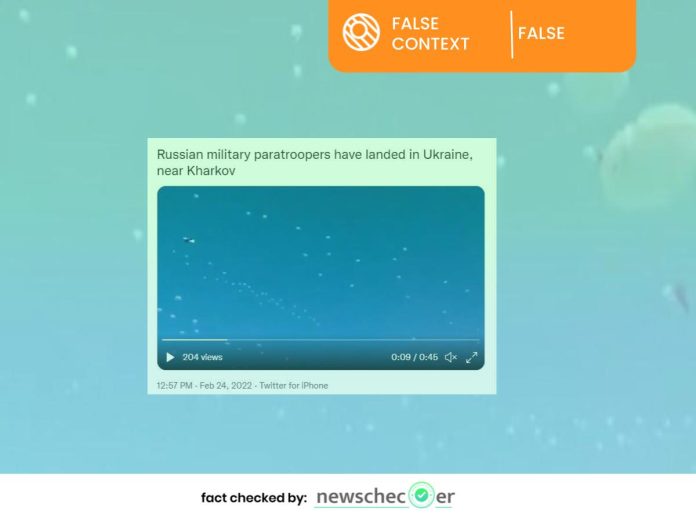 Russian President Vladimir Putin announced a  ‘military operation’ in Ukraine on Thursday. Soon after, several videos and images have found their way to social media platforms with the claim to show the Russian invasion in Ukraine. One such video was shared by social media users claiming to show “Russian military paratroopers” landing in Ukraine. However, Newschecker has found out that the video is old and unrelated to the recent Russian attack on Ukraine.

This 45-second video is being widely shared on Twitter with the caption, “Russian military paratroopers landed in Ukraine, near Kharkov.”

Soon after President Putin declared a war on Ukraine and asked its military to ‘lay down arms’, the Russian military breached the Ukrainian border, and bombed military targets near big cities, forcing Ukraine’s President Volodymyr Zelensky to impose martial law in the country.

In a video message, President Zelensky asked Ukrainians to ‘not panic’. “We’re strong. We’re ready for anything. We’ll defeat everyone, because we are Ukraine,” he said. Meanwhile, several world leaders have condemned the Russian attack on Ukraine.

Newschecker has debunked several misinformation related to the Russia-Ukraine crisis. You can read our fact checks here, here and here.

To verify the authenticity of the video, Newschecker conducted a reverse image search of the key-frames of the video on Yandex and found a link to a Russian website called ‘Bestlibrary.’

Following the link, we found that the same video of paratroopers was uploaded on the website on December 17, 2018 with a caption which roughly translates to, ‘ this is what Russian paratroopers look like.’

We found the video website called ‘Alisastom’, uploaded on December 24, 2018, with the same caption.

Notably, one of the comments under the videos read, “I watched this near Kostroma.” Kostroma is a riverside city in western Russia.

We continued our investigation and found the same video posted on a Facebook page called ‘Made in Russia’ on September 18, 2016. According to the post, the video was shot in 2014.

Despite multiple reverse image and keyword searches, we were not able to gather any more information about the video. However, this clip has been on the internet for at least the past eight years and is not related to the ongoing Russia-Ukraine clash.

Our investigation has found out that the viral video claiming to show Russian paratroopers landing in Ukraine is old and unrelated to Russia’s current attack on Ukraine.

Vasudha Beri
Vasudha noticed the growing problem of mis/disinformation online after studying New Media at ACJ in Chennai and became interested in separating facts from fiction. She is interested in learning how global issues affect individuals on a micro level. Before joining Newschecker’s English team, she was working with Latestly.
Facebook
Twitter
WhatsApp
Linkedin
Previous article
Viral Video Claiming To Show Russian Invasion of Ukraine Is Actually Gaming Footage
Next article
Old Video Of Rocket Attack In Baghdad Goes Viral As Russian Missile Strike On Ukraine