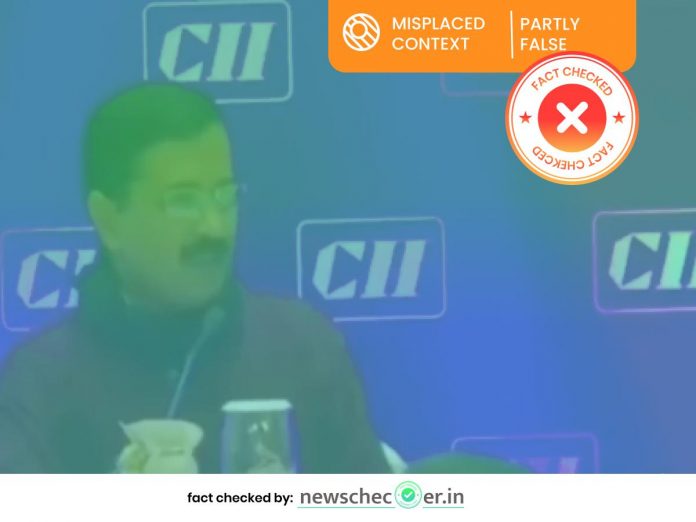 On 20 March, a Twitter user shared a 50-second video clip of Arvind Kejriwal, with the caption, “After reading the bill brought by Modi, Arvind Kejriwal decided to support the bill. We heartily thank Kejriwal ji.”

In the clip, Delhi’s chief minister can be heard saying, “Agriculture is a very important issue. I completely concede. And there are many dimensions to it, sir. The biggest one is agricultural pricing, the kind of prices that we are giving. And the amount of control we’ve placed on a farmer, we’re going to have to remove that. A farmer can only sell in a mandi? Why can’t he sell outside of it? Why can’t he sell outside his state, why only in his state? The amount of control we’ve garnered on a small farmer. The controls that you are unhappy with, they are also displeased with the same. I think there is a need to de-regulate it. The Centre needs to step off and reconsider the prices. I’ll give you a small example…”

This clip was also shared by Tajinder Bagga, BJP MLA Candidate for Hari Nagar Vidhan Sabha 2020, on the same day. Retweeted over 2,000 times and liked over 5,000 times (at the time of writing), his tweet translated from Hindi to English reads, “After reading the bill brought by Modi ji @ArvindKejriwal G decides to suport the bill. We heartily thank Kejriwal ji.”

An archived version of the post can be viewed here.

Many other users have shared this claim in the past few days.

This claim comes months after the Narendra Modi-led central government introduced three new agricultural bills in the parliament in September 2020. The bills are: Farmers’ Produce Trade and Commerce (Promotion and Facilitation) Act, Farmers (Empowerment and Protection) Agreement on Price Assurance and Farm Services Act, and the Essential Commodities (Amendment) Act.

Farmers, especially from the northern states of Punjab and Haryana have been protesting at various Delhi borders for nearly four months now.

In one among these videos titled, “Interaction with Mr Arvind Kejriwal, National Executive Member, Aam Aadmi Party” we can hear Kejriwal’s response, as heard in the claim, from the 7.22 minute timestamp. This video has garnered over 16,000 views.

In the first two minutes of this video, a member of the conference can be heard asking Kejriwal, “I have great respect for your elocution on corruption. But my question is on agriculture. As a country we have a dire need for another green, yellow, white revolution. Because unless we can raise the productivity levels to a vast extent our food prices will not be contained. You’ll have a great problem. Not just in inflation, and probably in law and order. Now while accepting your point on corruption, I think one has to go beyond this in the agricultural sector. Do you have any thoughts on this subject, sir?”

To this Kejriwal’s response from the 7.22 minute timestamp goes as follows: “Agriculture is a very important issue. I completely concede. And there are many dimensions to it, sir…I’ll give you a small example. I’m not sure whether it was wheat or rice. According to records of the Haryana government, the cost of production of that particular product is Rs 1,580 per quintal. And the minimum support price is Rs 1,250. You’re not even giving the farmer a cost at the minimum support price, how will he live? Obviously, there will be a problem. Swaminathan report says that we should give them cost plus 50% profits. If you start giving the farmer an honest profit margin..but there are many more complicated things.. we need many more things in agriculture. Maybe if you have ideas…”

Our research makes it clear that BJP MLA Tajinder Bagga and other Twitter users shared a 2014 video clip of Arvind Kejriwal from the sixth Confederation of Indian Industry’s National Council Meeting in New Delhi. The video clip in the claim also excludes Kejriwal’s response on minimum support price for farmers.

If you would like us to fact check a claim, give feedback or lodge a complaint, WhatsApp us at 9999499044 or email us at [email protected] You can also visit the Contact Us page and fill the form