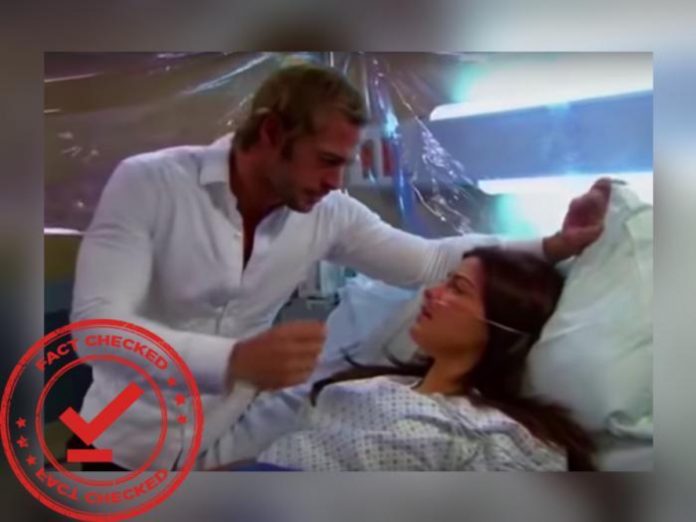 A video is going viral on WhatsApp and Sharechat claiming that the man and woman in the video are doctors who treated 75 coronavirus patients and now they both are infected by it. You can see the video below:

If you see the video carefully, it looks cinematic. One can wonder – when the disease is so infectious, who would shoot the two patients from different camera angles?

Though it was clear that this video cannot be related to the coronavirus pandemic, we tried to find out the source of this video.

One of the images took us to a YouTube link. Though, the video was unavailable, taking clues from the title we did a keyword search.

Search result by the keyword ‘Triumph of love’  can be seen below:

We found a movie named ‘Triumph of Love’ which was released in 2001 but its star cast was different from the viral video. There were many other videos in the result and when we clicked on one of them we found what we were looking for. The viral video is taken from a Mexican series called Triunfo del Amor.

We found the viral clip when a YouTube search was performed. The clip from the series was shared by many users.

The man and woman in the video are actors, William Levy and Maite Perroni.

Thus, the claim associated with the video is false and misleading. They are not Italian doctors who treated 75 coronavirus patients and got infected but are actors from a Mexican television series called ‘Triunfo del Amor’.

Facebook
Twitter
WhatsApp
Linkedin
Previous articleViral Posts Claiming Italians Threw Their Money On The Streets Due To Coronavirus Is False
Next articleIs This Scene Really From Current Day Italy? Here’s A Reality Check