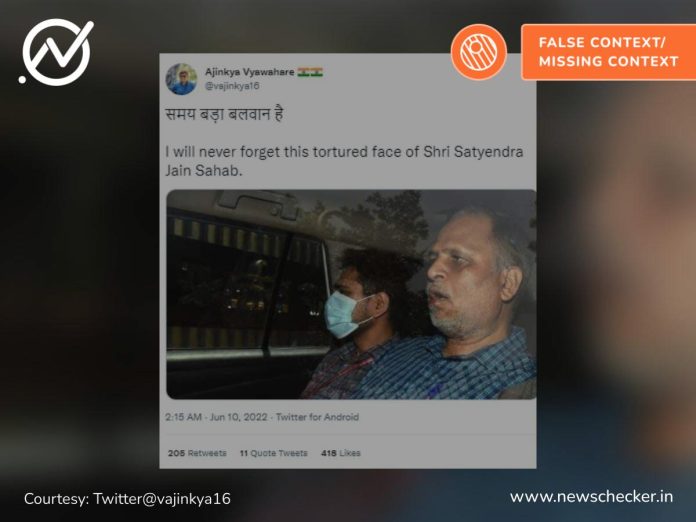 Amid the controversy surrounding the raids and the subsequent arrest of Delhi Health Minister Satyendar Jain, a photograph of the AAP leader in a car while being produced to the court, looking bruised and bleeding is going viral on social media. Users sharing the image seem to suggest that Jain had been roughed up at the ED office. Newschecker found these claims to be misleading.

One of the users who shared the image on Twitter was user  @vajinkya16 which has garnered 418 likes and 205 retweets on the platform. The image of Satyendar Jain has been shared along with the caption ‘I will never forget this tortured face of Shri Satyendra Jain Sahab.’

Newschecker found similar claims on Twitter with captions claiming that Satyendar Jain has been tortured by the ED.

In addition to these tweets several AAP ministers and verified accounts of journalists shared the viral image, including Delhi Chief Minister Arvind Kejriwal who retweeted the image. Although they did not claim that Satyendar Jain was tortured, it did mislead the users.

The Delhi minister was arrested in a money laundering case on May 30. The Enforcement Directorate (ED) said Tuesday it had seized Rs 2.85 crore and 133 gold coins during its raids on the home of Delhi minister Satyendar Jain and his alleged associates as part of a money laundering probe against him. On June 9, Delhi’s Rouse Avenue Court extended the custody of Aam Aadmi Party minister Satyendar Jain till June 13 on the demand of the Enforcement Directorate. But in the meantime his health deteriorated after which he was taken to Ram Manohar Lohia Hospital. Satyendar Jain’s counsel had sought for bail on medical grounds which Special Judge Gitanjali Goel reserved the order till 18th June, 2022.

We started our investigation by conducting a keyword search with the words “Satyendar Jain”, “ED office” and found an article by Mint titled Money laundering case: Delhi Minister Satyendar Jain sent to 14-day judicial custody uploaded on 13th June, 2022 which contained an  image similar to the viral image where it can be seen that Satyendar Jain is wearing the same clothes and but no bruises can be found on his face.

Upon further investigation, Newschecker found that the image was tweeted photojournalist of ANI news agency, Rahul Singh along with the caption ‘This photograph taken on June 09,2022 Delhi Health Minister Satyendar Jain being  brought to  ED Office from Rouse Avenue District Court, Health Minister Satyendar Jain was arrested by Enforcement Directorate in an alleged money laundering case on May 30  📸 Rahul Singh’.

Upon comparing the image tweeted by Rahul Singh with the viral image, it is clear that both images were taken a few seconds apart and that bruising is a visual illusion created by the reflection of trees on the glass windows of the car.

Newschecker Hindi Team’s Shubham Singh reached out to Rahul Singh to verify the authenticity of the viral image who commented saying that he had clicked the picture of Satyendra Jain which is viral on social media on June 09. Rahul Singh further added that “During that time I clicked several pictures one after the other in a few seconds. Out of which three pictures are available on the website of ANI. The picture which is being shared claiming to show Satyendra Jain’s lips bleeding, was actually the reflection of a tree which is falling on his face in the above picture.”

Newschecker investigation reveals that spots of blood on Satyendar Jain’s face as seen in the viral image is a visual illusion caused by the reflection of the trees on the glass window of the vehicle.

Vaibhav Bhujang
Vaibhav is a part of Newschecker’s English team, where he spots and debunks all kinds of misinformation, making the rounds on the internet. A Journalism graduate from St. Xavier's College, Mumbai, he holds an M.A degree in Philosophy and an M.Phil from Delhi University.
Facebook
Twitter
WhatsApp
Linkedin
Previous article2020 Video Of Lucknow Man Threatening To Shoot Muslims Shared As Recent
Next articlePoliceman In Kolkata Killed By Rioters? Viral Claim Is False