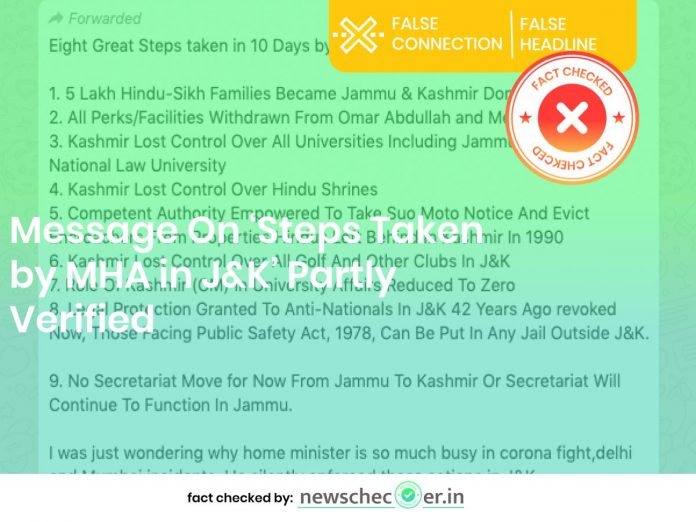 A Whatsapp message stating ‘Eight Great Steps taken in 10 Days by Ministry of Home affairs in J&K’ was circulating earlier in the month. We found this message circulating in various social media platforms including Reddit, Facebook, and Twitter with slight variations.

We recently received this message on our Whatsapp helpline for verification.

We verified a few points that were included in the message.

All Perks/Facilities Withdrawn From Omar Abdullah and Mehbooba.

Former Jammu & Kashmir chief ministers which include Omar Abdullah & Mehbooba Mufti have lost all perks after the Centre amended 138 legislations of the state. According to these news reports, a gazette notification the government amended Jammu & Kashmir’s State Legislature’s Act and increased pension amount to Rs. 75,000. It also mentions that the former chief ministers would no longer be entitled to a variety of facilities including rent-free accommodation and medical facilities among other things.

No Secretariat Move for Now From Jammu To Kashmir Or Secretariat Will Continue To Function In Jammu.

Finally, we contacted Mr. Khalid Majeed, Additional Secretary to the Government, Home Department, Jammu & Kashmir who confirmed point 1 which says, “5 Lakh Hindu-Sikh Families Became Jammu & Kashmir Domiciles” and point 9 “No Secretariat Move for Now From Jammu To Kashmir Or Secretariat Will Continue To Function In Jammu” in the Whatsapp message as per his understanding.

We were able to verify only a few parts of the message mentioned above as true.

We will update this story once we are able to verify other points.