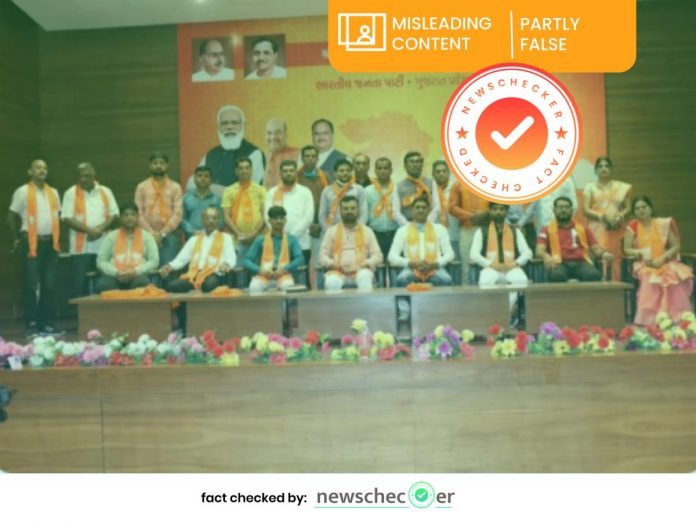 As Gujarat gears up to vote for its 182 members strong legislative assembly, political activity ahead of the polls in 2022 has started hotting up. This has also led to a rise in the number of misleading or false claims posted on social media, some of which Newschecker has debunked already.

The Bharatiya Janata Party and nine-year-old Aam Aadmi Party have emerged as the main contenders for the CM’s throne in Gujarat, with Deputy CM of Delhi & Senior AAP leader Manish Sisodia calling it a “straight contest”.

Against this backdrop, we spotted a widely shared post claiming that the “Whole AAP Gujarat Unit Joined BJP Today”.

The post has over six thousand likes and over a thousand retweets.

A reverse image search of the photo in the tweet mentioned above led to multiple results also claiming that AAP members in Gujarat have switched over to the BJP.

One such result led us to a tweet by the official Twitter handle of BJP Gujarat, with the caption claiming that over 250 Aam Aadmi Party workers in different districts of Gujarat had joined the Bharatiya Janata Party.

The same details have also been shared on the official Facebook page of the BJP in Gujarat with photographs of the induction ceremony.

However, the state BJP unit did not comment on the number of AAP workers inducted into the saffron fold but said they would share a press note of the induction ceremony. Newschecker has not received the press release at the time of publishing this copy. We will update this article once we have it.

On reaching out to the state unit of AAP, Tuli Banerjee -state media in-charge- denied the numbers quoted by the BJP saying, people have been changing the parties, but the number quoted by BJP is false. “Somewhere between 20 to 25 people have given their resignation to the party this month.”

During the course of our research, we came across other reports of politicians in Gujarat switching their allegiance and changing parties over the last few months. On August 24, Pradipsinh Vaghela, General Secretary, BJP Gujarat, posted on Facebook announcing the induction of AAP workers into the BJP.

In addition, we also came across another reported incident of BJP workers switching to AAP in the last few months. On June 8, the Indian Express reported that 300 BJP workers joined AAP.

While some AAP workers have joined BJP -250 according to the party’s Gujarat unit, the claim that the entire AAP has joined the ruling party is false.