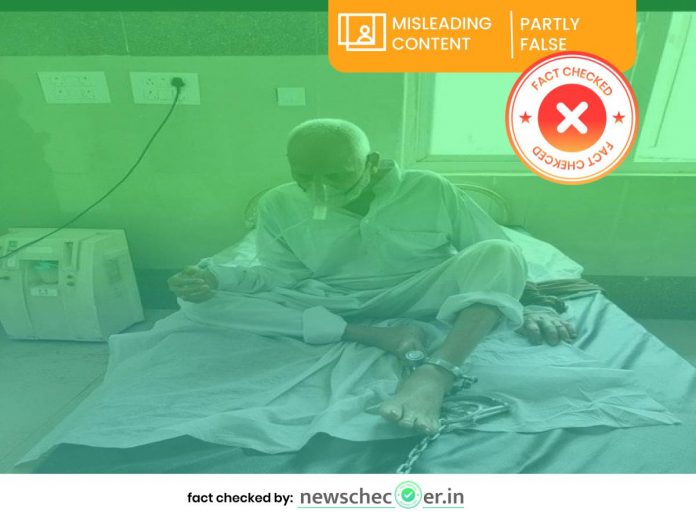 Soon after the death of Father Stan Swamy, an image of an old man chained to a hospital bed is being attributed to Swamy’s state in the hospital before his death.

The old man’s image chained to the hospital bed has been shared widely on Twitter and Facebook with hashtags #RIPStanSamy and #RIPStanSwamy.

One user on Twitter shared this image with the caption, “A ruthless & callous government that deprived him of getting Justice, dignity and Humanity. Our forefathers never fought for Azadi for 👇India where an innocent 84 yrs is Chained  fighting for Voiceless. #RIPStanSwamy”

Another user tweeted, “Modiji, did you really arrest #StanSwamy fearing from him !!? 💔💔💔 #RIPStanSamy” with the old man’s image.

We performed a reverse image search of the old man’s photograph in context and found that it’s of an elderly inmate, Baburam Balwan Singh in a hospital in Uttar Pradesh’s Etah district.

As per NDTV’s report, Baburam Singh, a convicted murderer was lodged at a district jail in Etah. He was taken to the hospital after he started having breathing issues.

In view of Baburam Singh being found tied to a hospital bed in the non-covid ward of Etah government hospital, UP Director General (Prisons), Anand Kumar, suspended the jail warder and ordered an inquiry, reported Times of India in May 2021.

In response to a user’s tweet, DG Kumar said that “orders have been given to suspend the Jail Warder Ashok Yadav with immediate effect and the supervisory officer’s explanation has also been sought.”

Stan Swamy, the tribal activist and Jesuit priest, was under judicial custody for his alleged involvement in the Bhima Koregaon violence. He was arrested on 1 January 2018 for making provocative speeches at the Elgar Parishad event in Bhima Koregaon, Pune.

Many opposition leaders have expressed their grief over Swamy’s death.

Swamy was suffering from Parkinson’s disease for the past several years. He was admitted to the Holy Family Hospital in Bandra in Mumbai after his health deteriorated and where he died on Monday afternoon.

This claim was first debunked in our Hindi fact-check.