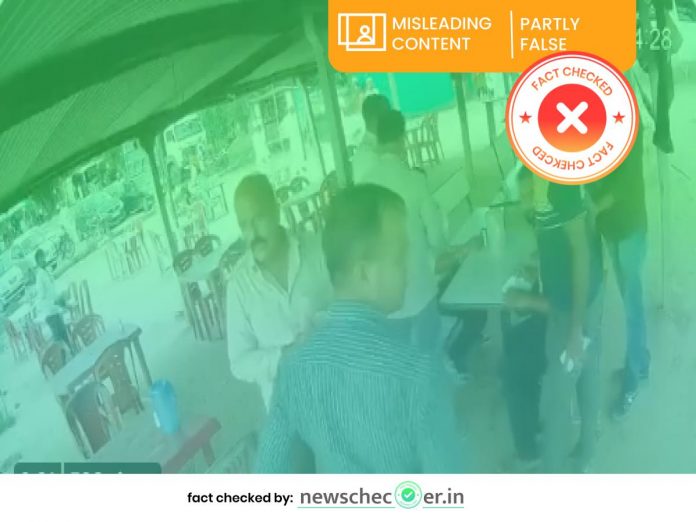 A video of policemen dressed in plain clothes and arresting an accused in an eatery has been widely shared on Twitter. The video clip shows the policemen pretending to look for a table at an eatery before nabbing the accused who is seen seated with three other men.

This video is viral with a claim which reads, “#CaughtOnCam Live operation of Bharuch Crime branch arresting a mobster named Siraj Mohd Anwar who was involved in Delhi Riots – He had a Gun!”

The claim along with the video in context was shared by many users on Twitter and Facebook.

Newschecker also received this claim on its Whatsapp tip line for verification.

We reached out to JN Zala, Inspector of Bharuch Local Crime Branch to clarify the viral video’s claim.

Zala verified that a person named Mohammad Siraj Anwar was arrested by the Bharuch local crime branch with an illegal pistol, but is not related to the viral video. He added that a press note has been posted by the official Twitter handle of Bharuch Police in regards to their arrest.

On 29 June 2021 Bharuch police released a press note which stated that they arrested an accused named Mohammed Siraj Anvar. He was accused of selling guns and lives in Bharuch, though a native of Mubarakpur, Lodhi Road, Delhi. This is a separate case and has no connection to the Delhi riots or the viral video.

With regards to the viral video, Times of India, Indian Express and Lokmat carried reports of this incident with the video clip and its screenshots.

As per the news reports, the arrest was made by Ahmedabad crime branch police on 27 June 2021.

“The accused was involved in 14 offences, including robbery and rape. He was captured at an eatery in Amarpura village in Saraswati taluka of Patan district. The accused had a pistol with him,” reads the Times of India report.

DP Chudasama, Assistant Commissioner of Police, Ahmedabad Crime Branch told Boom that “the main accused Kishore Panchal was involved in vehicular theft, assault, house burglary and illegal possession of arms. They are accused in cases of rape and extortion.” None of the accused arrested in the video were named Siraj Mohd Anwar nor do they have any connection to the Delhi riots, he added.

With inputs from Saurabh Pandey and Prathmesh Khunt.