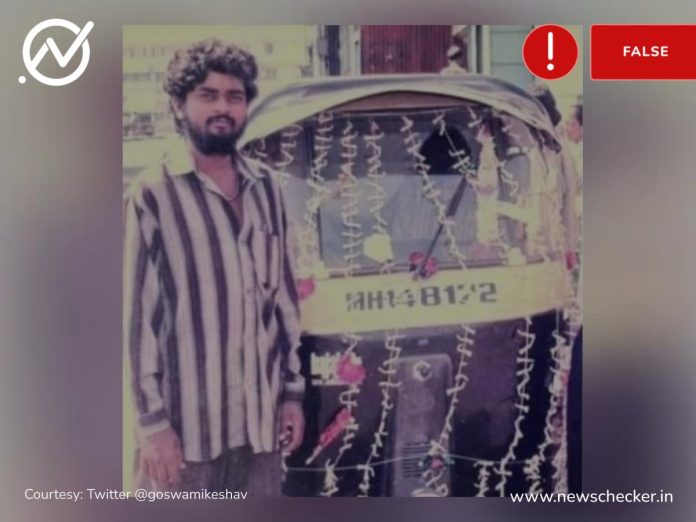 (The article was originally published in Newschecker Marathi )

A photograph featuring a bearded man standing in front of a decorated auto rickshaw is going viral on social media platforms. Those who shared the photo claim that it is an old photo of incumbent Maharashtra CM Eknath Shinde. Newschecker found the claim to be untrue. Though he did work as an auto driver, the man seen in the photo is not Shinde.

Several Facebook and Twitter users shared the photograph praising the journey of Eknath Shinde from an auto driver to becoming the Chief Minister of Maharashtra.

Newschecker also received the viral photo on our WhatsApp tipline (+91-9999499044) requested to be fact checked.

Eknath Shinde was recently in the news for meeting senior Shiv Sena leaders Manohar Joshi and  Liladhar Dhake amid the ongoing faction war within the party. Commenting on his visit, he said, “After taking charge of CM’s office, I decided to meet these Shiv Sainiks who have put in their everything for the party.”

Last month Shinde led a faction of Shiv Sena MLAs who rebelled against the party chief Uddhav Thackeray and resulted in the toppling of the MVA government in Maharashtra. Following which, the rebel faction backed by the BJP formed the government in the state with Eknath Shinde as the CM.

We began by ascertaining whether Shinde worked as an auto driver or not. A keyword search for “Eknath Shinde Auto Driver” on Google which yielded multiple reports confirming that he did work as an auto rickshaw driver before his political debut. You can read such reports here, here and here.

But Does The Viral Photo Show Eknath Shinde?

Newschecker continued the investigation to verify whether the viral photo actually shows Shinde or not.

We conducted a Google reverse image search on the viral photograph which led us to a report by Marathi news website Shabnam News, dated July 25, 2022. Featuring the viral photograph, the report stated that the man seen in front of the auto is one Baba Kamble and not Maharashtra CM Eknath Shinde.

A report by another Marathi outlet Esakal, dated July 25, 2022, also clarified that the man seen in the viral photograph is Baba Kamble, the founder president of Maharashtra Rickshaw Panchayat Samiti.

Kamble started his career as an auto rickshaw driver in 1997. In 2007, he founded the Maharashtra Rickshaw Panchayat Samiti. Kamble is currently the President of several associations including Kashtakari Kamgar Panchayat, Hamal-Mathadi Work Association and others.

Furthermore, we found a report published in Marathi newspaper Lokmat , dated July 24, 2022 with the title which roughly translates to ‘Rickshaw driver to Organisations leader.’ Displaying the viral photograph, the report elaborated on the life and achievement of Baba Kamble.

Newschecker contacted Kamble who confirmed that the viral photograph features him. “The photo going viral is mine. In 1997, a night stop was started at Pimpri Chowk. This photo is from the same time” he said .

Viral posts claiming to show Maharashtra CM Eknath Shinde as an auto driver are false. The man seen in the viral image is Baba Kamble.

Vasudha Beri
Vasudha noticed the growing problem of mis/disinformation online after studying New Media at ACJ in Chennai and became interested in separating facts from fiction. She is interested in learning how global issues affect individuals on a micro level. Before joining Newschecker’s English team, she was working with Latestly.
Facebook
Twitter
WhatsApp
Linkedin
Previous articleBudgam Youth Arrested For Digging Tunnel To Girlfriend’s House? No, False Claim Goes Viral
Next articleViral Image Of A Broken Road Is Not From India But From Thailand