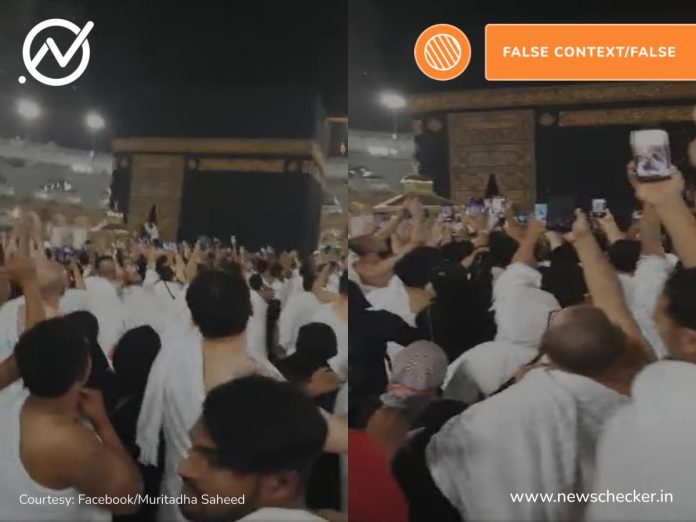 A video claiming to show a ‘miracle taking place at the Kaaba’, where worshippers were witness to the “prayers performed by unseen Muslims (jinns and angels)” is going viral on social media platforms.

Several Facebook users shared the video claiming that “The Muslim call to prayer was heard and 2 rakkah prayers observed while the imam and azan were present. The door of the inner part of Kaaba was opened but nothing was seen inside. The Muslims present were seen recording the prayer being performed by unseen Muslims (possibly jinns and angels).”

The video is doing the rounds on Twitter as well, with users making similar claims.

Links to such Tweets can be found here, here and here.

Kaaba is a small shrine located near the centre of the Great Mosque in Mecca, Saudi Arabia. It is a cube-shaped structure that is constructed of grey stone and marble. The interior of the shrine contains three pillars supporting the roof and a number of suspended silver and gold lamps. Most of the year, Kaaba is covered with a black cloth, the kiswah. Members belonging to Islam consider the shrine as the holiest and most sacred spot. Five times prayer daily and the hajj, an annual pilgrimage to Kaaba, are two of the five pillars of Islam, the most fundamental principles of the faith.

Also Read: No, Kerala Bus Driver Did Not Wear ‘Islamic Attire’ On Duty

Newschecker skimmed through the comment sections associated with the viral video to find a comment by one ‘Uzair Firdos Sherpao’ who responded to a post by Muritadha Saheed saying “This is fake because on this date we were in Kaaba shareef and we haven’t noticed anything.”

Calling out the claim as false, another user Mahrukh Jat shared a link to a Facebook post by page ‘Will Of Allah’, dated May 20, 2022.

We further looked up the official social media handles of Haramain Sharifain, a digital news outlet, that provides information on the Two Holy Mosques, which clarified in a Facebook post on May 20, that the claims of “paranormal activities” in the Kaaba were false.  “The video is from Ramadan when the door of the Ka’bah was opened for one of the Muslim Leaders visiting the Haram,” the post read.

Newschecker also contacted Sameera Aziz, a Jeddah-based Saudi media person, who stated that the claims of “miraculous” opening of doors at Kaaba were fake. “During month of Ramadan (a Holy month of Islam for fasting), the doors of the Holy Kaaba is opened to the Muslim leaders from any country, who is visiting the Mecca. When the pilgrims saw that the door of Kaaba was being opened, they started making the video because this is a scene seldom witnessed by Muslims,” Sameera Aziz said.

“In the specific fake viral video, pilgrims could not go inside the Ka’aba door, but they watched it from far and stopped performing their prayers & recorded the scene. They seemed very happy and loudly started reciting verses form the Quran (Muslim’s holy book) & as seen in the specific viral video. However, it is not true that angels or Genie opened the door. This is very normal in Allah’s home (Kaaba) in Mecca that the voices of the Quran’s recitation & Azaan are heard. Many just dramatized such an emotional situations for social media views and ratings. But it is false, fake, and lies,” she clarified.

We conducted a keyword search for ‘Kaaba door opening miracle’ on Google and found a report published on the website ‘The Islamic Information’ on May 20, 2022, that also clarified the claim to be false. The report stated that “the general presidency of the two holy mosques has confirmed on the news that the video of the miracle is fake.”

It added that the video was shot during the month of Ramadan and that the door was opened for the Prime Ministers and Presidents from all around the world to visit the holy mosque to perform Umrah. The report stated, “the door is usually opened for influential personalities, and the sanitization process occurs once their delegation leaves”.

Viral claims about doors of Kaaba opening “miraculously” and “jinns and angels” performing prayers is untrue. The video was shot during the month of Ramadan and the door of the Kaaba was opened for one of the Muslim Leaders visiting the Haram.

Article Published In The Islamic Information On May 20, 2022

Vasudha Beri
Vasudha noticed the growing problem of mis/disinformation online after studying New Media at ACJ in Chennai and became interested in separating facts from fiction. She is interested in learning how global issues affect individuals on a micro level. Before joining Newschecker’s English team, she was working with Latestly.
Facebook
Twitter
WhatsApp
Linkedin
Previous articleNo, Kerala Bus Driver Did Not Wear ‘Islamic Attire’ On Duty
Next articleViral Video Of Pfizer CEO Discussing ‘Pills With Microchip’ Shared Out Of Context