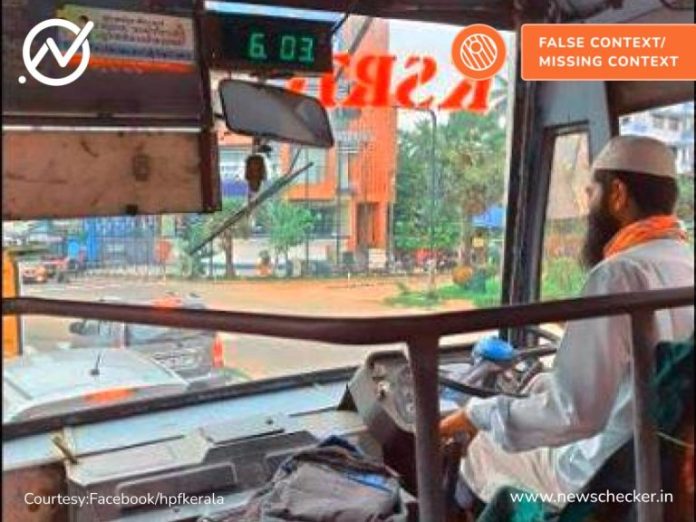 Social media users on Twitter are sharing an image showing a bus driver on duty, wearing what appears to be a white Kurta & a skull cap with a long beard, as opposed to the standard sky blue shirt and pants. Many users questioned the Kerala State Road Transport Corporation over the ‘flagrant violation’ of the uniform policy, while others wondered if it would be made standard across other state forces including police and fire force. But Newschecker’s investigation has revealed that the image is being shared out of context.

BJP Kerala State President, K Surendran was among the many users who shared the image on his official Twitter account on May 25 with the caption, “This photo (24.05.2022) is from the Kerala RTC’s fast passenger bus from Thiruvananthapuram to Mavelikkara. Where is the uniform? Is it the new uniform of the KSRTC drivers? Who knows whether some of the Police & Fire Force officers will come to duty in this uniform?” Archived version of the same can be seen here.

Many other users also shared the same image with similar claims.

Archived versions of the same can be found here, here and here.

Also Read: No, Sabarimala’s Aravana Payasam Tender Not Given To UAE Based Firm, Viral Forward Is Misleading

Kerala also has a history of political killings, with the most recent instance being the murder of K Sreenivasan, an RSS leader in Palakkad. The Opposition has also accused the LDF government of taking a soft line on fundamentalism in the Kerala.

To verify if the Kerala bus driver really violated the official uniform code, Newschecker reached out to the office of the KSRTC CMD,  Biju Prabhakaran who provided us with a press release on the matter, dated May 25, 2022.

The release stated that the KSRTC bus driver was wearing a proper uniform and that a vigilance probe, ordered after the photograph became viral, found the image to be misleading.

The press release identified the driver seen in the image as one PH Ashraf of the Mavelikkara unit and added that the viral image was clicked when Ashraf was on duty in bus number ATK 181 on the Thiruvananthapuram-Mavelikkara route on May 24.

Confirming that Ashraf did not violate any uniform code, the KSRTC vigilance department probe found that Ashraf had spread a thorthu (white towel typical to Kerala) over his lap to avoid staining his uniform, which, when photographed from a specific angle, gave the appearance of him wearing an Islamic attire.

“On analysing the image closely, it can be seen that he was wearing a full-sleeve sky blue shirt with navy blue trousers as defined by the KSRTC,” the press note said.

We continued our investigation and found a Facebook post, dated May 26, 2022, by a user ‘Kara kalanja bus premi’ (A bus fanatic without colour), who shared an image that detailed the KSRTC’s specification regarding their uniform. The circular read, “the drivers of Kerala State Road Transport Corporation shall wear Navy Blue pants and Sky Blue shirt or churidar while on duty.” However, there is no prescription on the length of the sleeve.

Newschecker also found an order issued by Transport Commissioner  Tomin J Thachankar, dated December 29, 2015, which stated that the drivers of the KSRTC will wear navy blue pants and sky blue shirt or churidar while on duty. However, this does not specify whether or not clothing items related to religious beliefs, such as a skull cap, are allowed to be worn on duty or not.

Newschecker Malayalam team also contacted PH Ashraf, the driver in question, who told us that he was in his uniform on duty, and that he had clarified the same with the management when quizzed.

We can thus conclude that PH Ashraf, the Kerala bus driver who is seen in the viral photograph, was indeed wearing the proper uniform – sky blue shirt and navy blue pants- as prescribed by the authority. His image is being shared out of context to misled people into believing that he violated the uniform code by wearing clothes which are attributed to one particular religion.

( This article was translated from Newschecker Malayalam by Vasudha Beri)

Vasudha Beri
Vasudha noticed the growing problem of mis/disinformation online after studying New Media at ACJ in Chennai and became interested in separating facts from fiction. She is interested in learning how global issues affect individuals on a micro level. Before joining Newschecker’s English team, she was working with Latestly.
Facebook
Twitter
WhatsApp
Linkedin
Previous articleBiden Gave Cold Shoulder To PM Modi At QUAD Summit? No, Viral Video Is Clipped
Next articleMiracle In Kaaba? No, Viral Claim About Prayer By The ‘Unseen’ In Mecca Is False