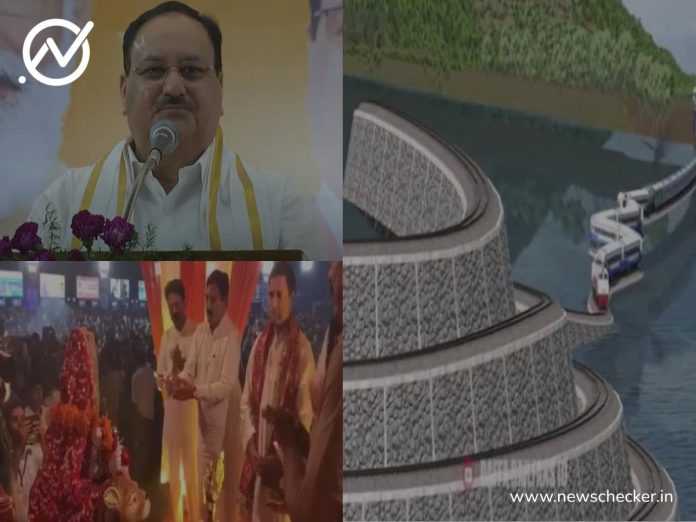 A politically charged week with the PFI being banned, Rahul Gandhi’s Bharat Jodo Yatra and Congress’ Rajasthan developments saw a range of misinformation on social media platforms.  While some prominent political figures became the target of misinformation, others ended up making false claims like BJP President, JP Nadda, falsely claimed that 95% of “construction work” for AIIMS Madurai had been completed, and a clipped part of a 5-year-old video was shared to show Rahul Gandhi ‘refusing’ to do aarti at a pooja. From a gaming footage being passed off to show an ‘engineering marvel’ in Israel to social media users wrongly claiming RRR to be the first movie to be played in cinema theatres in Kashmir after 1947, here are our top 5 fact checks from the past week:

During his recent visit to Tamil Nadu, BJP Chief JP Nadda made various claims regarding the progress in completion of AIIMS Madurai.While in  Karaikudi, Nadda claimed that  ₹1,225 Cr have been  spent for AIIMS Madurai, in Maduri he said that 95% of construction work was completed for the hospital. Newschecker found both the claims made by Nadda in regard to AIIMS Madurai to be false. Read more here.

A video showing a train going up a pyramid-like railway bridge is going viral on social media, with the users claiming that the video is from Israel, and that the ‘engineering marvel’ covers 1280kms,  from Urpara to Begun Jarra. Newschecker’s investigation has revealed that a gaming footage from ‘Trainz Railroad Simulator 2019’ is being passed off as an engineering marvel of the railway system in Israel.Read more here.

An old video allegedly showing Rahul Gandhi ‘refusing’ to partake in ‘Aarti’ at a puja is going viral on social media platforms. While many users questioned his stance on ‘Hindu beliefs’, others expressed shock at Gandhi’s refusal to partake in the rituals. However, Newschecker found that a clipped part of a longer video is being shared to make a false claim. Read more here.

Different media houses and social media pages have claimed that ‘RRR’ is  the first movie to be played in cinema theatres in Kashmir after 1947. Newschecker’s investigation revealed that the claim of ‘RRR’ being the first movie to be screened in cinema theatres in Kashmir after 1947 is wrong. The findings suggest that Kashmir had several functional cinemas till the militancy began in the 1990s. Read more here.

Several social media users have claimed that the Ashok Gehlot-led Congress government in Rajasthan has “banned” pooja during Navratri in the Hinglaj Mata temple of Barmer. Some Twitter users mocked the Congress party, stating that they have done something that even Pakistan did not do at its Hinglaj Mata temple in Balochistan. Newschecker found the claim to be false. Read more here.

Vasudha Beri
Vasudha noticed the growing problem of mis/disinformation online after studying New Media at ACJ in Chennai and became interested in separating facts from fiction. She is interested in learning how global issues affect individuals on a micro level. Before joining Newschecker’s English team, she was working with Latestly.
Facebook
Twitter
WhatsApp
Linkedin
Previous article
Hurricane Batters Florida: Old, Edited Photo Of Shark Wading Through Flooded Street Viral Again
Next article
Iranian Man Dancing At Daughter’s Funeral? No, Viral Footage Is From An Azerbaijani Show