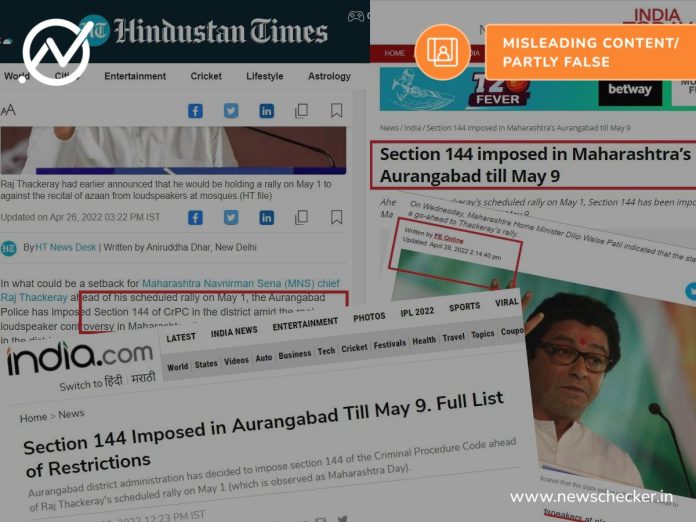 Ahead of MNS President Raj Thackeray’s scheduled visit to Aurangabad on May 1, several media outlets, both national and Marathi, reported that section 144 has been imposed in the city.

The Indian Express, Hindustan Times, India Today, India.com and Financial Express were among the many publications that published the news that Section 144 has been imposed in Aurangabad.

Maharashtra Navnirman Sena (MNS) President Raj Thackeray has been given permission to organise his highly-anticipated rally in Aurangabad on May 1, India Today reported. The meeting will take place on the grounds of Aurangabad’s Sanskiritk Krida Mandal Maidan. The rally comes in the backdrop of his call to stop blaring the Azan on loudspeakers in Mumbai, which triggered the Hanuman Chalisa row.

On research, Newschecker found an order issued by the Commissioner of Police, Aurangabad on 22 April 2022 under Sections 37 (1) and (3) of the Maharashtra Police Act, 1951.

To understand  if the  order referred to the implementation of Section 144, we analsyed the letter carefully,

Nowhere in the order was it mentioned that section 144 and curfew were imposed in Aurangabad. The letter only mentions certain precautions on the basis of section 37 (1) and (3) of the Maharashtra Police Act, 1951.

1) Carrying weapons, swords, spears, sticks, sticks, guns, knives, sticks or sticks or any other object which may be used for bodily injury.

2) Carry any alkaline or explosive.

3) To carry, collect or manufacture stones or missiles or equipment to be released or thrown away.

4) Displaying a corpse or figure or image of a person.

6) Delivery of harangues, the use of gestures or mimetic representations, and the preparation, exhibition or dissemination of pictures, symbols, placards or any other object or thing which may in the opinion of such authority offend against decency of morality or undermine the security of or tend to overthrow the State.

If you look at these sections mentioned, there is no mention of a curfew or implementation of Section 144 anywhere.

We contacted the Aurangabad Commissionerate of Police for more information and were informed that”Sections 37 (1) and (3) have been implemented in Aurangabad. This Act comes under the Maharashtra Police Act, 1951. Section 144, the curfew, has not been enforced. “

We also attempted to reach the Commissioner of Police of Aurangabad Nikhil Gupta, but could not get in touch. The article will be updated with the reaction of Dr Nikhil Gupta when we receive it.

On further research, we also found an article published in Dainik Divya Marathi which quotes  Police Commissioner Dr. Nikhil Gupta and clarifies that  there is no curfew in Aurangabad.

Our investigation reveals that Section 144 has not been implemented in Aurangabad. An order has been issued in Aurangabad under sections 37 (1) and (3) of the Maharashtra Police Act, 1951.

This article was originally published in Newschecker Marathi

Pankaj Menon
Pankaj Menon is a fact-checker based out of Delhi who enjoys ‘digital sleuthing’ and calling out misinformation. He has completed his MA in International Relations from Madras University and has worked with organisations like NDTV, Times Now and Deccan Chronicle online in the past.
Facebook
Twitter
WhatsApp
Linkedin
Previous article
Viral Video Of Railway Station Being Vandalised Over ‘Train Siren Disturbing Namaz’ Is False
Next article
Reports Of ‘Super Football Agent’ Mino Raiola’s Death Went Viral Before His Actual Demise