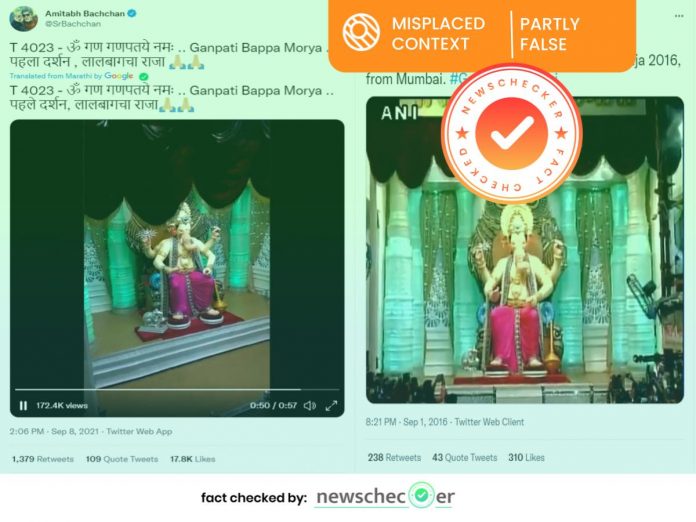 Ganesha Chaturthi, one of the biggest festivals in India is widely celebrated with vim and vigour across Maharashtra over ten days. This year though, the festivities beginning on 10th September will have to be held according to the state’s latest COVID19 guidelines which prevent more than five people from gathering at the pandals or mandaps and has prohibited processions of idols in the city which otherwise attracted lakhs of devotees every year.

As Mumbaikars geared up for the festival amidst restrictions, a post by Amitabh Bachchan went viral. The Bollywood actor shared a video showing the unveiling of a Ganesha idol claiming it to be of the “Lalbaugcha Raja”, named after Lalbaug in Mumbai where the idol has been placed for public display every year since 1934.

Lalbaugcha Raja is one of the most visited idols in the city and is known to be one of the tallest (20 feet tall in 2019). Lakhs of people visit the Lalbaugcha Raja every year including the Bollywood celebrities.

The 78-year-old superstar posted the video on his Facebook page which has over thirty-eight million followers- on 8th September 2021, saying “First Darshan, King of Lalbaug,”.

The actor posted the same video on both Twitter and Instagram with the same message, “ॐ गण गणपतये नमः .. Ganpati Bappa Morya .. पहला दर्शन, लालबागचा राजा,” written in Hindi. The posts received thousands of comments and shares on both these platforms.

Social media users were quick to share this video claiming, “First Look Of Lalbaugcha Raja 2021 Mumbai.” The posts claiming the photo to be recent were liked and shared thousands of times online.

A reverse image search of keyframes of the video led us to a video from 2016 with the same visuals.

Another video on the YouTube page of IndiaTV news channel showed the same idol with the caption, “Ganesh Chaturthi 2016: Here’s The First Look Of Lalbaugcha Raja 2016.”

News agency ANI has tweeted this video in 2016 showing the unveiling of a Ganesha idol similar to the one posted by the actor. Though the angles in which the videos are shot are different, it is clearly visible that both the videos are of the same idol.

A Google image search for “Lalbaugcha Raja 2016” shows results for images that are indistinguishable when compared with the idol claiming to be of 2021.

After users pointed this out to actor Amitabh Bachchan, he responded by saying that he never claimed that images were from 2021.

Meanwhile, the Lalbaugcha Raja Sarvajanik Ganeshotsav Mandal, which sets up the Ganesha idol in Mumbai’s Lalbaug stated that due to the fear of a third wave and to prevent further spread of Covid-19, “the darshan of all the devotees will be done online”.

An old video of the Ganesha idol is being shared with the false claim “First Look Of Lalbaugcha Raja 2021, Mumbai.”

Ujwala P
Facebook
Twitter
WhatsApp
Linkedin
Previous articleVideo Game Footage Shared By Indian Media Channels Claiming It To Be From Panjshir Valley.
Next articleHas The Entire Unit Of The Aam Aadmi Party In Gujarat Switched To The BJP?