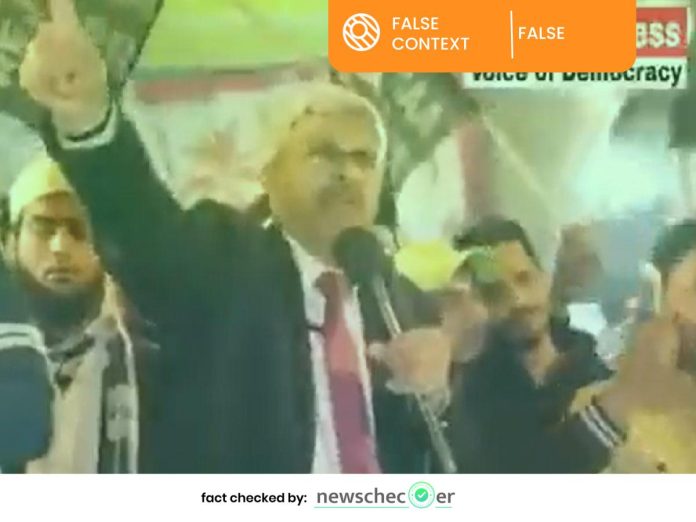 The Himalaya group found itself in the centre of controversy on Thursday, when it started trending on Twitter India, as several users called for a boycott of the products over the company’s ‘halal certification’. The posts, going viral on social media with an image allegedly showing a notice in the company’s Pune office, claimed that the products manufactured by the group were halal certified, and asked others to boycott Himalaya products over the same. In this context, a video showing a man addressing a large assembly, exhorting them to boycott Reliance and Patanjali products is also being widely shared by many social media users, identifying the man as the ‘owner of Himalaya company.’ Newschecker has found this claim to be false.

In the video, the man can be heard saying “Change all the mobile phone (connections) that are associated with Reliance. Get any other alternative- be it Idea or Vodafone or Airtel. But we have to hit Reliance. So stop using Reliance products. In addition, stop buying petrol from Reliance petrol pumps. Do not buy any products that are being sold by Reliance.”

The man is also heard talking about the Patanjali group. “Similarly, products sold by Ramdev. More than 60% of these products are waste and useless. What else does he do but make people eat cow dung? Stop using Ramdev’s products. More than half of the money he makes goes into making weapons for RSS,” the man is heard saying.

The video is also viral on Facebook, with many users sharing the video with similar claims.

To verify the authenticity of the claim, Newschecker analysed the viral video and found that the video carried the water mark of ‘Times Express’. The video also shows a crowd  of burqa class women and several posters that carry the words ‘Repeal NRC’. These point out that the video is from protests against the Centre’s controversial Citizenship Amendment Act and the NRC exercise.

Upon further research on YouTube using related keywords in Hindi, we found a video uploaded on January 25, 2020 on the  official channel of Times Express, which was similar to the video that is going viral on social media. According to the description of the YouTube video, the person delivering the speech is the well known lawyer Bhanu Pratap Singh (Advocate Supreme Court of India, Bhanu Pratap Singh).

We further researched more about the ‘owner’ of Himalaya, and found that the chairman of the Himalaya global groups is Meraj Menal, the Global CEO post is held by  Shailendra Malhotra and the CFO is Jatin Brahmecha. The man in the viral image and the image of Meraj Menal are compared below and bear no similarity.

A video showing well known lawyer Bhanu Pratap Singh addressing an anti-CAA rally in Delhi in 2020 is going viral, falsely claiming to show the ‘owner’ of the Himalaya group.

Pankaj Menon
Pankaj Menon is a fact-checker based out of Delhi who enjoys ‘digital sleuthing’ and calling out misinformation. He has completed his MA in International Relations from Madras University and has worked with organisations like NDTV, Times Now and Deccan Chronicle online in the past.
Facebook
Twitter
WhatsApp
Linkedin
Previous article
Viral Image Of AAP Leader Raghav Chadha Wearing Makeup Is Morphed
Next article
No, Rana Ayyub Didn’t Link Will Smith Slapping Chris Rock To Hinduism, Viral Article Is A Satire