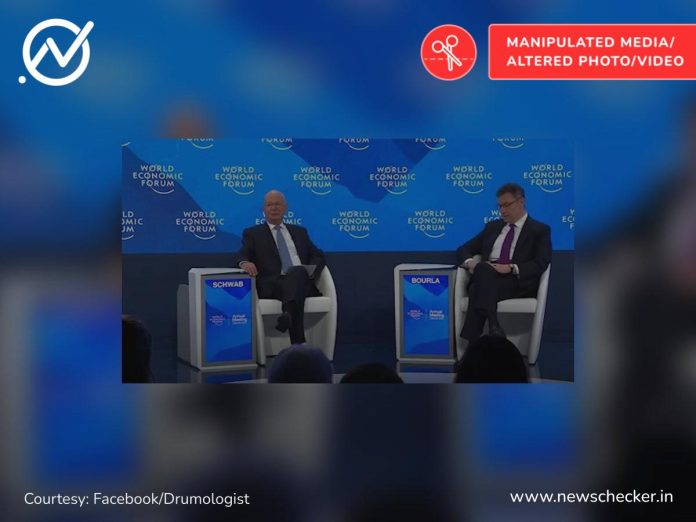 A video of Pfizer CEO Albert Bourla speaking at the World Economic Forum is going viral on social media, along with the claim that the company aims to reduce the population of the world by 50% by 2023. Newschecker found that the video has been edited.

In the video, Albert Bourla is heard saying that when they set up the goals for the next five years in 2019, one of them was to “reduce the number of people in the world by 50% by 2023”. He is also heard stating that today, this dream is becoming reality.

The video has been shared on Facebook by user Jaime Maeso Kaatzo along with the caption ‘Pfizer CEO Says it’s their dream to Reduce the Population by 50 percent in 2023.’

Newschecker found many similar claims on Facebook with similar captions.

Pfizer and Bourla have been at the receiving end of multiple fake claims by anti-vaxxers, ranging from Bourla’s arrest to his wife’s death after taking the COVID vaccine. You can read some of our fact checks here, here and here.

We started our investigation by conducting a reverse image search of the key-frames of the video on Google and found a longer version uploaded on the official Youtube channel of the World Economic Forum on 25th May, 2022.

Around the 2 minute mark, Albert Bourla is asked a question regarding a major announcement made by his company, Pfizer. Bourla goes on to speak about the company’s decision to make all of their patent protected medicines available in the United States of America and Europe, be made available to the poorest 45 countries of the world. He goes on to state that one of the goals of Pfizer was to reduce the number of people who cannot afford their medicines by 50% by 2023.

Newschecker found that the line “that cannot afford our medicine” has been edited out of the viral video.
Upon conducting a keyword search with the words “Pfizer”, “announcement”, “poor countries” we found an article by the Guardian uploaded on their website on 25th May, 2022 titled ‘Pfizer to offer all its drugs not-for-profit to 45 lower-income countries’.

According to the article “Pfizer has announced it is to supply all its current and future patent-protected medicines and vaccines on a not-for-profit basis to 45 lower-income countries and is talking to other big drugmakers about similar steps.

Announcing an “accord for a healthier world” at the World Economic Forum (WEF) annual meeting in Davos, the New York-based pharma firm pledged to provide all its products that are available in the US and Europe on a cost basis to 1.2 billion people in all 27 low-income countries such as Afghanistan and Ethiopia, plus 18 lower-middle-income countries including Ghana.”

Upon further investigation, Newschecker found a press release by Pfizer on their website titled ‘Pfizer Launches ‘An Accord for a Healthier World’ to Improve Health Equity for 1.2 Billion People Living in 45 Lower-Income Countries’.

According to the press release “Pfizer Inc. today launched ‘An Accord for a Healthier World.’ This groundbreaking initiative aims to provide all of Pfizer’s patented, high-quality medicines and vaccines available in the U.S. or the European Union on a not-for-profit basis to 1.2 billion people in 45 lower-income countries. The Accord seeks to greatly reduce the health inequities that exist between many lower-income countries and the rest of the world.”

The Guardian report, Pfizer to offer all its drugs not-for-profit to 45 lower-income countries (25th May 2022)

Vaibhav Bhujang
Vaibhav is a part of Newschecker’s English team, where he spots and debunks all kinds of misinformation, making the rounds on the internet. A Journalism graduate from St. Xavier's College, Mumbai, he holds an M.A degree in Philosophy and an M.Phil from Delhi University.
Facebook
Twitter
WhatsApp
Linkedin
Previous articleOld Image Of IAF Chopper Shared As Tara Air Plane Wreckage In Nepal
Next articleGangster Goldy Brar Photographed With Punjab CM Bhagwant Mann? No, Viral Image Shows A Different Person With The Same Name