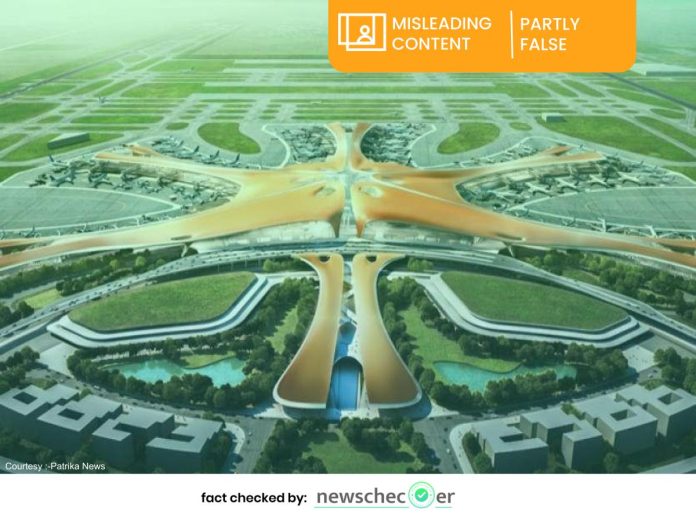 Prime Minister Narendra Modi, on Thursday, November 25,  laid the foundation stone of Jewar Airport in Noida, pegged to be the largest in Asia and the fourth largest in the world at Noida, Jewar. It will also be the first net zero emission (pollution free) airport in Asia. Following the foundation stone laying ceremony, a number of ministers and BJP leaders took  to social media to congratulate the PM and the UP government for the project. Newschecker has found that the image is actually that of Daxing Airport in Beijing.

Union Home Minister Anurag Thakur was among those who shared a video carrying the image of the Daxing airport. The post had gathered over 100 retweets and 500 likes. The viral image which is shared as a model picture of Jewar Airport, has been shared by many users on Facebook and Twitter.

This is not the first time that unrelated projects are passed off as that of Uttar Pradesh. Earlier this year, a UP government advertisement in Indian Express carried the image of a flyover from Kolkata. Recently, image of Srisailam dam in Andhra-Telangana border was shared as that of Bhaoni dam.

A Google reverse image search for the model image shared by the news channels about the Noida International Airport being laid at Jewar has yielded some results. According to a report published by The Guardian in February 2019, the picture is originally of the Beijing Airport in China. The Beijing Daxing International Airport was opened in October 2019.

A Google keyword search about the Beijing Airport also found a similar picture posted by Daxing Airport and gettyimages, according to which it is the largest airport in the world and the second international airport located in Beijing.

The foundation stone of Noida International Airport was laid by PM Modi on November 25, during which he was also presented with a model of Jewar Airport. A model picture of the Jewar Airport can be seen on the tweet posted by ANI UP in this regard, which is quite different from the viral picture.