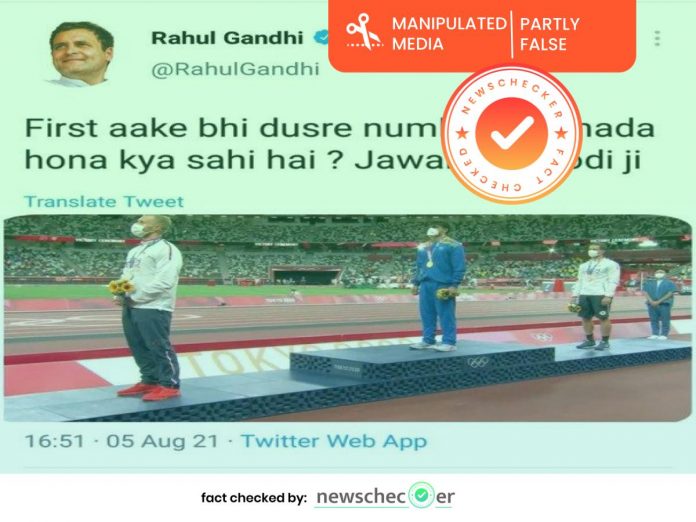 In English, this caption translates to, “Even after coming first is it right to stand in the second position? Answer, Modiji”

Landing his spear at 87.58m, Neeraj Chopra won the gold medal at the Tokyo Olympics in the men’s Javelin throw event on 7 August. The 23-year-old from Panipat became the first Asian man to win the competition at the Olympics as well as the first Indian track and field athlete to become an Olympic champion, reported India Today.

We further browsed through Rahul Gandhi’s official Twitter handle (@RahulGandhi) to verify if he indeed tweeted on 5 August as seen in the claim. We found that on 5 August at 4:51 pm Gandhi congratulated Indian wrestler Ravi Dahiya who won the silver medal at Tokyo Olympics.

A comparison of the viral screenshot and Gandhi’s actual tweet from his official handle on 5 August at the 4:51 pm timestamp can be seen below.

Apart from this, Gandhi congratulated the Indian men’s hockey team on their Olympic win and tweeted images en route to the Parliament with hashtag #SansadGherao on the same day.

On 7 August, Gandhi congratulated Neeraj Chopra for his Olympic win in two Facebook posts. One of his captions read, “Neeraj Chopra take a bow! A billion hearts beat for you today and each one of us couldn’t be more proud. #Tokyo2020”

Also Read: Viral Image Of Teary Photographer Is Not From Lionel Messi’s Farewell

The viral screenshot claiming to be from Rahul Gandhi’s official Twitter handle asking PM Modi for an answer related to the Tokyo Olympics is morphed.